Here’s the backstory. Congressman John Lewis, a Democratic Member of the House of Representatives from Georgia, said that Donald Trump was not our legitimate president. He said that this was because in his view Trump was elected by the Russians. To date, he is the only Congressperson making that most unpleasant accusation that Trump is not our legitimate President.

Inter alia, in response the Tweeter-In-Chief sent off a two sentence response. Here’s the first sentence: 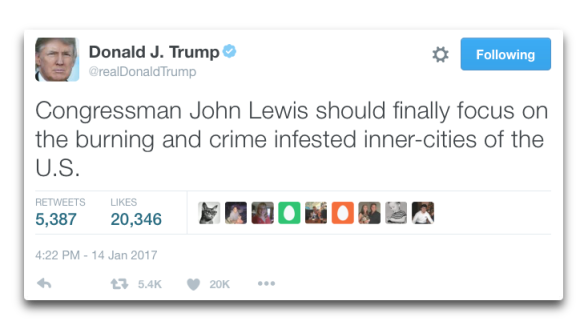 Lewis’s district includes most of Atlanta, which does have the typical inner-city problems shared by many US cities.

Now, after that pretty direct and critical start, what would you think Trump would say, or what might you want to put in, for the second sentence?

Maybe something like “29 years a congressman, no results” … Lewis has been in office since 1987.

Or perhaps something more neutral like “Tough problem no easy answers”.

You could get aggro in your second sentence and go for “Vote him out if he cannot do it!”

You could warn him off in the second sentence, “He shouldn’t focus on me!”

Or Trump might speak to Lewis’s claim that Trump is not legitimate, maybe “CIA says Russia didn’t hack election results”.

I laughed at the actual result:

Leadership. It’s a curious thing. At all instants you are trying to build and strengthen the team, and move everyone towards a common goal.

In this regard, Trump met yesterday with the game show host Steve Harvey … who said after the meeting that Trump is going to work with him on a project of Harvey’s aimed at … yes … the aforementioned “burning and crime-infested inner cities”.

Predictably, the response from the Democratic side regarding Representative Lewis has been on the order of “Boo, Trump is insulting a true civil rights hero” and the like. I can only hope that Representative John Lewis will set aside this nonsense and get over the election loss and join in the effort. Our inner cities are a tragedy and a running sore.

Sadly, Trump is right. We need all the help we can get on this and all of our problems.

Regards to everyone on a lovely clear evening,

PS: If you comment please QUOTE THE EXACT WORDS THAT YOU ARE DISCUSSING, so that we can all be clear about your subject.