On the outskirts of Las Vegas there’s a mid-range trailer park that grandiosely styles itself the “Orchard Mobile Home Estates”. There is no orchard in sight. It’s not the bottom of the pond for trailer parks, but it’s a ways from the top. A 41-year-old waitress lives there in a double-wide trailer, with her two kids who are eleven and nine. She’s single, but she wasn’t always single. She was married to a lawyer when she had the kids. In fact, it was her waitressing job that put him through law school. They had a happy family until he said he wanted “space to find himself”.

Apparently, said “space” involved a shocking proportion of the law firm’s escrow account as well as a twenty year old legal assistant whose “assistance” seems to have been mostly horizontal. In any case, she hasn’t heard from the bum and his slut for seven years. She was left with all their debts, including his student debt which in an excess of feelz she had stupidly co-signed, so she’s on the hook for the whole thing. So far she’s paid off about a third of it.

After he cleaned out the bank account and left, she went back to waitressing. She moved into the double-wide with her kids. She took on an extra shift. She pays her taxes and raises her kids as best as she can. She has no slack in her budget, which she juggles constantly. Childcare is a constant nightmare. More food means less clothing. A high fuel bill means short rations all round. Their school is one-third illegal immigrants. She worries about her kids constantly. She has an old car that drinks gasoline faster than her ex drank expensive booze, a gas-guzzler she owns for a simple reason—she can’t afford a fuel-efficient car. She needs it to get to work and prays that it doesn’t die and that gas prices don’t go up.

So … here is the important question.

How much of her hard-earned tax dollars does she want us to spend on the National Endowment for the Arts, where one-fifth of direct NEA grants go to multimillion-dollar arts organizations and museums, and where some guy got money she can only dream of, $15,000, to put a crucifix in a jar full of urine and take its photograph?

How much would she say the NEA should get of her taxes? 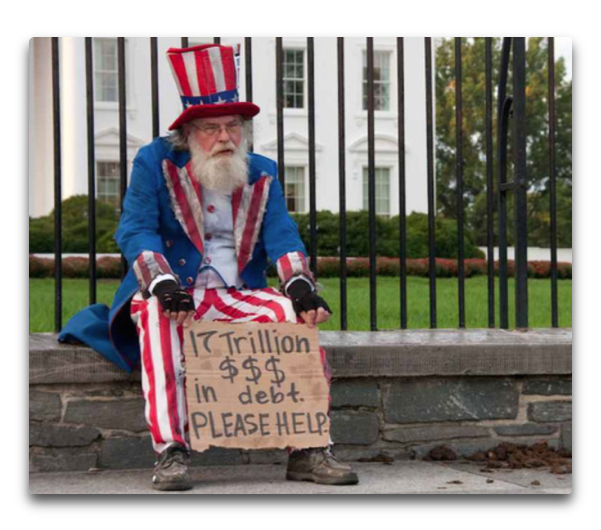 And regardless of how we got here, we are in deep financial trouble.

Currently, we finally and fortunately have a President who wants to do something about that. To reduce the debt, we have to cut the budget. And in that process, we will undoubted be cutting out programs that are somebody’s favorite. Heck, every program is someone’s brilliant idea. And nobody ever wants to give up “free” government money.

So let me propose what I might call the “Poor Taxpayer Test” to use in this ongoing fight to bring government spending under control.

For each program that the President has proposed cutting, think about how that program looks to that waitress living in the Las Vegas double-wide in particular, and how it looks to the hard-pressed and hard-working poor taxpayer of every race and station in general. Ask yourself, would they want us to spend money on this program?

From that point of view many things become clear. We do not want to spend money on the National Endowment for the Arts. We should not throw money down a climate rathole in the hopes that it might perhaps cool the earth by 0.1°C in fifty years. We cannot afford to educate and feed illegal immigrants. We should not spend money on the National Endowment for the Humanities. The Humanities can take care of themselves until such time as we’ve taken care of the humans.

We cannot go on wasting billions on Defense budget cost over-runs for fighter planes and ships. In short, we cannot and should not pay for a whole host of programs, some started under Obama but most of them long-standing, because of one simple reason.

We’re broke. Busted. Out of money. In debt up to our ears. So we need to examine every dollar we spend, and we need to cut out everything but the essentials.

We’ve gotten that broke by borrowing money only to waste it on things that look all pretty but do little for the people who both deserve it and need it the most—THE TAXPAYERS. We need to break our focus on what the residents of other countries need, and what illegal immigrants need, and what petulant college students need, and what Somali refugees need, and focus on WHAT THE TAXPAYERS NEED. We’re broke. We cannot afford to pay for ourselves, much less for others. So the Somalis may just have to wait.

Be clear that this doesn’t mean that conservatives are heartless or callous, or that Americans don’t care about Somali refugees or the arts. Americans are caring to a fault, our generosity is one of our problems, and as an artist and a musician I know the value of the arts. So not paying for the NEA doesn’t mean we think that art is unimportant.

Now, it will take a while to turn the massive cash-burning US Government steamroller around, and much longer to work our way out of debt. It will not be pretty, and there will be a lot of baby birds cheeping “FUND ME, FUND ME, YOU MUST FUND ME BECAUSE YOU ALWAYS FUNDED ME BEFORE” … sorry, folks, but we can’t just keep flashing the Taxpayer Express credit card for every cause, no matter how good the cause might be. The party’s over. The wallet is empty. The bank is rupt.

So … the next time that you are outraged by some proposed cut in some program that you think is critical, let me invite you to consider the waitress living in the Las Vegas double-wide who is working two shifts, and apply the Poor Taxpayer Test to your favorite program. Would she want her tax dollars spent on what you are advocating? In general she wants her tax dollars spent on the schools and the roads, on keeping the nation safe, on caring for the elderly, on providing jobs, on clean air and clean water, on things that actually benefit her and everyone today.

The Poor Taxpayer Test is, does she want to take money from one of those important things just to fund your program?

If we apply that test, I suspect that everyone can come to some kind of agreement about what spending is unimportant and unjustifiable when we’re underwater in debt.

Finally, I see many people who despair of ever paying off the debt. And to be fair, $20 trillion is a lot of green.

But the Gross National Product of the US is about $17 trillion. So we’re in debt a bit more than one years GNP. This is the equivalent of say a business with gross annual sales of $170,000 being $200,000 in debt. Not the best situation to be sure, but one that a business can dig its way out of IF IT TIGHTENS ITS BELT.

So the bad news is we’re trillions in debt, and the good news is that we can get out of debt as long as we consistently apply the Poor Taxpayer Test to all of our spending, tighten up our belts, raise our chins, and work together to make it all work.

87 thoughts on “The Poor Taxpayer Test”