I see that the United Nations High Commission for Human Rights is continuing its lunatic hegira to some imaginary perfect world. This time they are taking up the imaginary crime of “hate speech”. These days, “hate speech” accusations are most commonly used by a variety of governments and individuals to prevent discussion of the problems with Islam.

In support of this claim, I offer the two most recent cases, the persecution of Geert Wilders  for asking “Should we have more or fewer Moroccans in the Netherlands”, and the more recent persecution of Marine Le Pen, not for doing anything criminal, but for posting pictures of some of the inhumane criminal brutality committed by ISIS. The common thread is a brazen attempt to criminalize the criticism of Islam.

Two days ago, the UN High Commission for Human Rights put out a declaration regarding what they claim is”hate speech”.  It starts as follows:

20 March 2017 – On the eve of the International Day for the Elimination of Racial Discrimination, the United Nations human rights chief today reminded Governments around the world that they have a legal obligation to stop hate speech and hate crimes

As far as I know, the US Government has absolutely NO legal obligation to stop hate speech. None. And in the US such a law would clearly be un-Constitutional. We are guaranteed the right to express our hatred of anything, whether it is the President, or Islam, or anything else that we hate. Ingrown toenails. Our jobs. Our spouses. We can say we hate anything we damn well please, and no UN functionary can say otherwise. (Of course, the UN statement doesn’t mention Islam, no, no, that wouldn’t do at all … but I digress.)

I further object to the UN Chief’s claim that he is “reminding” governments of a non-existent obligation. He is not the father of the world who has come to chide his children or “remind” us of something we’ve forgotten. He is our servant, not our conscience, and we pay his salary. He can certainly recommend things to us, that’s fine … but he is presuming far beyond his station, status, and personal history to “remind” of one damn thing.

Finally, I strongly object to the underhanded joining of two very different things, hate crimes and hate speech, and to his pretending they are the same. They are not. Hate crimes are crimes. Hate speech is free speech that the UN Chief doesn’t happen to like.

The Big Chief goes on:

He urged Governments to adopt legislation expressly prohibiting racist hate speech, including the dissemination of ideas based on racial superiority or hatred, incitement to racial discrimination, and threats or incitement to violence.

This man is a professional at jamming unrelated things together and claiming they are all the same. Not only does he say these things are they all the same, but they are all so bad we need to implement new laws to deal with them. So let’s look at them one at at time, starting with his claim that we should prohibit speech expressing “racial superiority”.

I can find you ten websites today that claim that black people are far superior to white people, and another ten that claim the opposite. These statements of racial superiority, while they may be unpleasant, are absolutely protected free speech under the US Constitution. Despite that, the Big Chief of All His UN Children continues apace:

“It is not an attack on free speech or the silencing of controversial ideas or criticism, but a recognition that the right to freedom of expression carries with it special duties and responsibilities,” he said.

Hogwash. Bovine waste products. It is absolutely an attack on free speech to prohibit a black man from saying, for example, that in terms of looks black women are far superior to white women. It’s an idea based on racial superiority, no question … but it is also absolutely protected speech.

(I’m reminded of living in the Solomons Islands, where almost all the locals are black, brown, or Chinese. I was walking with my Solomon Chinese buddy, the manager of the local band I played in. A cruise ship was in town, a very unusual occurrence. An immense pasty-white woman in short shorts, a halter top, and a straw hat came sailing around the corner in the bright tropical sunshine. It was scary, there were acres of white skin topped by a sour expression like she had encountered a bad smell. After we’d gotten out of her path and turned to watch her stately passing, I said to my friend, “Man, you don’t have to white to be ugly, but I figure it gives us an unfair racial advantage.” He fell out. The UN Grand Gorgonzola would likely have arrested me on the spot for my assertion of white racial superiority. But I digress … we were speaking of protected speech.)

Next, we are “reminded” by Mr. Big Cheese UN Man that we have a “legal obligation” to prohibit the dissemination of ideas based on hatred. Right there you’d have to assume that this guy has been to college. Only a college graduate would think that we could stop people from “the dissemination of ideas based on hatred”. Dear heavens, there are hundreds of thousands of hateful messages posted on the internet every day. How on earth does he plan to stop that? That doesn’t pass the laugh test.

And of course, since the secret subject is Islam, you can be sure that he isn’t talking about the endless hatred spewed by Muslims against Israel and the West …

Next, Big Chief Knows-More-Than-Us “reminds” us we have a “legal obligation” to prohibit the incitement to racial discrimination. By this, I assume he means advocating the highly unequal treatment of blacks, Asians, and whites under the Affirmative Action laws in the US … because if that’s not what he means, it certainly fits the description. Yes, I know it was done for “noble” reasons, but it has been highly destructive nonetheless. And since decisions are being made based on nothing more than race, it is assuredly racial discrimination.

The Chief goes on to say we also have a legal obligation to stop threats. No sure how any state can stop threats, but in any case in the US threatening someone can indeed be a crime. If you seriously and believably threaten to harm someone you can be charged. And if it is neither serious nor believable … who cares?

Obviously, that could not be applied to anything said on the web. No matter what I say, there’s almost no way I could intentionally incite someone to immediate violence. Instead, it has been applied in the US solely to “fighting words”, something said in a social setting which would whip the hearers up to immediately go attack their neighbors. It would apply, for example, to someone leading a lynch mob whipping the crowd into a frenzy.

But anything short of that is legal.

Sadly, I would note that the very strongest online incitements to violence these days come from Islam. ISIS regularly calls for people in the west to KILL THEIR NEIGHBORS … but nooo, again, you’ll notice that His Noble UN-Consciousness didn’t mention that either.

As I said, the statement from His Royal UN-Pleasantness jammed together a wide variety of thing ranging from the ludicrous to the unenforceable to the one exception to the US First Amendment guarantee of free speech.

So … anyone care to take bets on the religion of the man leading the UN charge against hate speech?

Yes, you are right. His name is Prince Zeid bin Ra’ad, of Jordan. But he can’t use his title when working for the UN, so he’s required to be plain Mr.Zeid Ra’ad al-Hussein. So I guess that at least he comes by his unpleasant holier-than-thou attitude honestly. If you are born a prince, looking down on commoners is what you do … doesn’t make it any more likable, however. 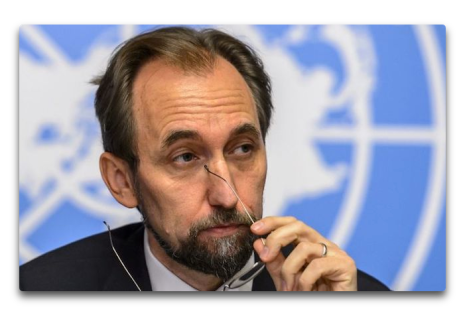 It gets worse. His Princeliness was also one of the main authors of the abomination known as the International Criminal Court (ICC). Fortunately, the US is NOT a member of this international power grab. We’re saved by the Constitution. The Supreme Court has long held that only US courts have the right to try citizens for crimes committed on US soil … but the ICC claims jurisdiction for any crime committed anywhere. Sorry, Princey, not interested …

It gets worse yet. The Prince is from Jordan. Here’s a bit of Jordan’s human rights record.

In 2006, two newspaper editors who reprinted cartoons of the Prophet Muhammad previously published by the Danish newspaper Jyllands-Posten were sentenced to two months of imprisonment.

In 2011, Jordan initiated a trial in absentia against Danish cartoonist Kurt Westergaard, the creator of the offending cartoon, as well as 19 Danish journalists and editors who had published the cartoon in various news outlets.

In 2009, Jordanian poet Eslam Samhan was sentenced to imprisonment and a fine for blasphemy after having included Quranic verses in his poetry.

Those evil Jordanian Muslim maniacs are throwing cartoonists in jail, and their precious Prince wants to lecture us on proper speech???

Sadly, it gets even worse. The UN Bloatocrat Formerly Known as Prince is rabidly anti-free-market. His official Twitter account tweeted the following, before hastily deleting it:

“Urgent threat”? And why is a Human Rights Chief involving himself in economic questions at all??

My take on Prince Zeid bin Ra’ad is that he is likely a cultured, educated, decent, and eminently presentable gentleman, a wonderful man to fill an empty seat at dinner, urbane and polished, who unfortunately thinks that he and his elite friends should be in charge of the highest court on the planet; that his kangaroo court should rule over every single person on Earth; that the free market is a danger to mankind; and that criticism of Islam constitutes “hate speech” and must be stopped, by violence if necessary. In addition, he’s clearly OK with throwing cartoonists like me who’ve drawn cartoons of Mohammed in jail, and he says nothing about the Koran-inspired hate speech that jams the airwaves.

Gotta say … as usual, the UN has totally beclowned itself by elevating this most pleasant of unpleasant fellows to his lofty, very well-paid, and totally undeserved position. Instead of using his title and responsibilities for good, he is doing his best to cover up the manifold wrongs done in the name of Islam by declaring that any criticism of Islam is “hate speech”. This view is a very dangerous modern trend, one that is totally antithetical and inimical to free women and men everywhere.

Onwards, dear friends, what a glorious time to be alive.

43 thoughts on “The UN Condemns Freedom of Speech”