You’ve likely heard of the Law of Unintended Consequences, which states that every human activity has consequences unforeseen and unintended by those participating in the activity.

I got to thinking about this after talking to my doctor about the opioid epidemic in the US. I remarked that I and other folks have no idea how the opioid epidemic started. So he laid it all out for me … and it turned out to be something that I’d never heard of. 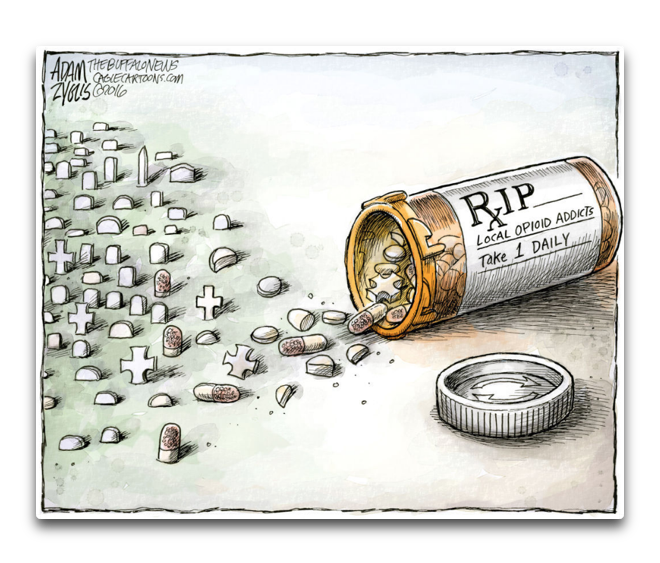 Now, my doc is an amazing guy, wicked-smart and endlessly compassionate. In Japan, they have people who are designated as “Living National Treasures” … and if he lived in Japan, my doc would have that title. Here’s what he told me.

He said the epidemic was started with what is generally acknowledged to be the finest paving material for the road to the place of perpetual perdition … that old standby, “good intentions”. The Government decided that doctors weren’t taking their patients’ pain seriously enough, especially poor patients. So they decided to change that by regulation … hey, when you have a hammer, everything looks like a nail. They decided on the following guidelines for their new regulations:

Gosh, that sounds wonderful. It’s got the good feelz, it has the proper buzz words, it wants to “facilitate the exchange of ideas”, it encourages “therapeutic” opiate use … what could possibly go wrong with that?

In the event, California was the first state to go nuts on the question, no surprise there. In 1999 there was a new addition to the California Health and Safety Code stating:

Every health facility licensed pursuant to this chapter shall, as a condition of licensure, include pain as an item to be assessed at the same time as vital signs are taken. The pain assessment shall be noted in the patient’s chart in a manner consistent with other vital signs.

And in 2000, the US Congress passed a similar bill, establishing the “Decade of Pain Control and Research”.

The problem, according to my doc, was that because this had become part of the law, doctors were being strongly pressured by the Government to prescribe more pain pills … so they did. In fact, the Government began to assess each hospital based on whether or not they were prescribing what the Government thinks is an adequate amount of opiates … and if they are not prescribing enough opiates, they can lose their accreditation.

Among other things, a numeric pain scale became mandatory in the post-anesthesia care unit, and before the patient can be discharged, they have to have an “acceptable” pain score or … they get more opiates.

Yeah, that’s the ticket … force the doctors to hand out happy pills before they are allowed to let their patients out the door …

Again I have to ask … what could possibly go wrong with forcing hospitals and doctors to prescribe more opiates?

Well, what could go wrong is that the average opiate consumption per patient went up by 15% in the first two years after the new standards came into existence, from 2000 to 2002 … I’ll quote from a very good history of the new pain standards:

Pain had become the enemy that needed to be eradicated.

Many organizations implemented treatment policies and algorithms based on patients’ responses to numerical pain scales. One study reported that the incidence of opioid oversedation increased from 11.0 to 24.5 per 100,000 inpatient days after the hospital implemented a numerical pain treatment algorithm. Soon after this, the Institute for Safe Medication Practices (ISMP) linked overaggressive pain management to an alarming increase in oversedation and fatal respiratory depression events.

Seeing this, the authors of the various regulations started cutting back on the recommendations. From the site linked to above:

The 2001 Example of Implementation that said “Pain is considered a ‘fifth’ vital sign in the hospital’s care of patients” was changed in 2002 to say “Pain used to be considered the fifth vital sign.” By 2004, this phrase no longer appeared in the Accreditation Standards manual, although the phrase remained in some Joint Commission educational materials for several years after that. All Examples of Implementation were completely eliminated a few years later.

However, this attempt to fix things ran headfirst into the First Law of Worm Cans, which states:

If you open a can of worms, to get them all back in you’re gonna need a bigger can.

Unfortunately, to date we haven’t found the bigger can. The hospitals are still bound to pay too much attention to peoples’ pain, and not enough attention to their addictability. The demons have been loosed, and now, the opioid crisis is far beyond the ability of doctors and hospitals to deal with it. Here’s a profile of the typical 2017 opioid addict: 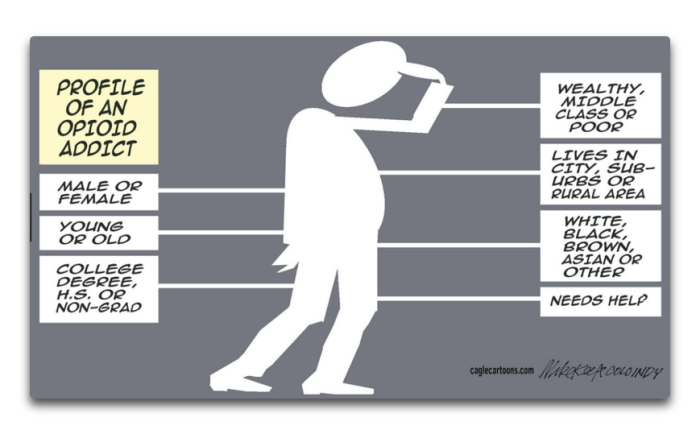 And as you might imagine, my doc is not happy about any of this. He feels, and with good reason, that doctors and hospitals are the ones getting screwed in the deal. His point is that politicians oughta keep their dang bureaucracy out of medical decisions, and let the doctors manage the pain as they best see fit … but NOOOO, the Nanny State was unable to keep their hands off.

Ah, well, success has many parents, but failure is an orphan …

Best to all, and my compassion to all addicts everywhere,

27 thoughts on “The Law Of Unintended Opiates”