And in each and every one of these countries, socialism has not just failed—it has cratered with a huge toll in human suffering, economic deprivation, and death. Every time. No exceptions.

However, the socialist folks always have a ready-made excuse for the failure of socialism in all of these countries … in humorous form, the excuse goes like this:

Q: What’s the difference between Nazism and Socialism?

A: Nobody ever tried to excuse Nazism’s failures by saying “But it wasn’t TRUE Nazism” …

Here’s the most prominent American Socialist these days, engaging in a calm, measured, collegiate, reasonable debate on the merits of TRUE socialism:

Bernie Sanders is a millionaire “socialist” who just accidentally happens to own three houses, all of them probably nicer than yours. I guess George Orwell was right when he wrote that all animals are equal, but some animals are more equal than others … but I digress.

So … just what is this “socialism” that everyone is on about? At its core, it is an economic system where the government owns and controls the means of production and distribution of wealth. Here’s a dictionary definition:

Socialism: a political and economic theory of social organization that advocates that the means of production, distribution, and exchange should be owned or regulated by the community as a whole.

And here is Merriam-Webster on the subject:

Socialism: any of various economic and political theories advocating collective or governmental ownership and administration of the means of production and distribution of goods.

And also of course, under socialism the “distribution of goods” by “the community as a whole” somehow always manages to distribute the most valuable goods to the Swiss bank accounts of the Socialist leaders … see the leaders’ wealth in the list of countries above as evidence.

Now, bear in mind that socialism at its base is an economic system, and NOT a political system. Historically it has usually been instituted by force. However, if the people are foolish enough to vote for socialism, as they were in Venezuela, it is then called “Democratic Socialism”.

However, as Venezuela has proven, voting for “democratic” socialism doesn’t make it any less lethal … people are fleeing Venezuela, their economy is so bad that they can’t even produce toilet paper, people are eating their pets … but as any socialist will seriously tell you, this wasn’t TRUE socialism. You can tell because it failed, and TRUE socialism cannot fail …

Next, let me clear up one extremely common and dangerous misconception. Socialism is NOT about taxpayer money providing social services like the Fire Department, or roads, or medical care, or the Post Office, or the military, or public parks, or the Police, or piped water. Those are all services, and all governments of all types provide a greater or lesser range of services. That’s the basic reason that we have governments.

So please, don’t be claiming that the northern European countries are socialist. They are not, because those European governments do NOT own the farms, fishing boats, and factories. Those countries may provide a wider range of taxpayer-paid services than the US or other countries provide … but that does NOT magically make their capitalist economies into socialist economies. Quite the opposite. Their successful capitalist economies are the reason that they can afford to provide those services …

So what kind of socialism are these short-sighted Americans advocating? Many of them, including the freshly-minted New York socialist politician yclept Alexandria Occasional-Cortex, are members of the Democratic Socialists of America (DSA).

And what does the DSA advocate for?

It’s the usual recycled boring socialist mantra. Here’s their NewSpeak description of their ideals, from their website:

Democracy would be expanded beyond the election of political officials to include the democratic management of all businesses by the workers who comprise them and by the communities in which they operate. Very large, strategically important sectors of the economy — such as housing, utilities and heavy industry — would be subject to democratic planning outside the market, while a market sector consisting of worker-owned and -operated firms would be developed for the production and distribution of many consumer goods. In this society, large-scale investments in new technologies and enterprises would be made on the basis of maximizing the public good, rather than shareholder value.

I don’t understand this level of foolishness. They are talking about putting janitors and typists and delivery drivers in charge of managing the corporations and businesses that they work for. And for the rest, there will be “democratic planning outside the market” on the basis of “maximizing the public good” … and if that doesn’t chill your blood and make you grab on to your wallet, you’re not paying attention to history.

I also like the passive-voice magical quality of their incantations, such as the following:

“Would be developed”? Developed by who, exactly, and for whose benefit?

Perhaps the clearest example of why socialism doesn’t and can’t work was given by Matt Ridley in a post here. He said:

Ten million people eat lunch in London most days; how the heck they get what they want and when and where, given that a lot of them decide at the last minute, is baffling. Were there a London lunch commissioner to organise it, he would fail badly. Individual decisions integrated by price signals work, and work very well indeed.

Seriously, can you imagine some poor socialist London Lunch Commissioner trying to get that right? Their first action would be to standardize the lunches so they could be mass produced in a central facility, beans and frankfurters for everybody, problem solved …

And London lunches are far from the most complex of situations that “individual decisions integrated by price signals” are able to solve and solve very well. I know that many folks don’t like it but … lightly but firmly regulated free market capitalism is a horrible system that just happens to work better than any other economic system ever invented.

Now, you can’t get the marks inside the circus tent without promising them a pile of freebies, viz: 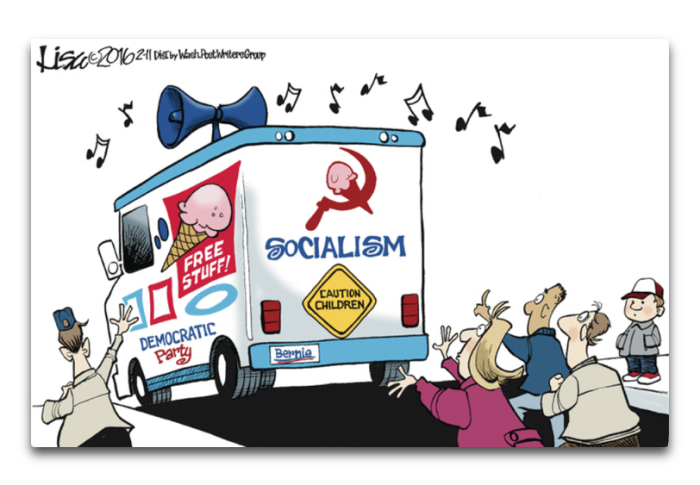 According to their website, the Democratic Socialists think that the following should be 100% free:

Education (from pre-K through higher education)

And of course, since this doesn’t cover necessities like buying condoms and having enough dope to smoke or beer to drink, their agenda also includes:

A universal basic income — that is, a base salary for every member of society, regardless of the person’s employment status.

How on earth do they plan to pay for that? And more importantly, just who do they think will pay for it? These folks seem to forget a basic rule of economics:

For everyone who is given money without working for it, someone else has to work without getting money for it.

Or as Margaret Thatcher famously said,

The trouble with socialism is that sooner or later, you run out of other people’s money.

Nor is this the end of the lunacy of the Democratic Socialists of America. Again from the DSA website:

Economic democracy would be complemented in the political sphere by a new system that combined an overhauled form of representative democracy (our current system) with direct democracy, a system in which individuals participate directly in the making of political decisions that affect them. In this system, the Senate (an extremely unrepresentative political body in which states with very small populations have the same level of representation as the most populous states) would be abolished, and a system of proportional representation would be established so that Congress actually reflects the political will of the electorate.

Hey, why not? I mean, the US system of divided government, with both Senators and Representatives, has worked very successfully for 250 years, so let’s junk the Senate and try something totally new. What could possibly go wrong? It’s worth noting that the “states with very small populations” will be totally ignored in the new system, while the populated states will rule everyone … the stupid, it burns …

These folks seem to have no clue why we have the system we have. It’s because the US is a union of states, as the name clearly says—we are the United States, not the “United People“. And when the states first united, the “states with very small populations” were very worried that idiots like the Democratic Socialists of America would put all of the power in the hands of the big states, and they would have no say at all in how they were governed, or anything else … so we have the Senate and the Electoral College to make sure that everyone’s voice is heard.

Messing with that amazingly successful system at this point would be the height of stupidity, which may be why the DSA is pushing it—they’re going for a new world record, or at least a personal best, in political cluelessness.

And what else does the DSA want?

Public resources would be devoted to the development of a genuinely free press and a democratically administered mass media.

Oh, yeah, that’s a brilliant plan, because publicly owned and “democratically administered” government propaganda organs have been such a powerful force for truth around the world … and what else?

A wide range of programs to dismantle the privileges associated with whiteness, maleness and heteronormativity would have to be developed, and antidiscrimination policies in the workplace and in social organizations would have to be intensified.

So they are simultaneously going to attack “whiteness” and “discrimination” … foolish me, I thought that attacking people based on the color of their skin, as they are doing, WAS discrimination. I can see that I’m falling behind in my ability to understand NewSpeak.

In closing, let me say that in reading through the various DSA manifestos, and in listening to or reading the speeches of Bernie Sanders and Alexandria Occasional-Cortex, the truth shines through clearly, viz:

We have always been at war with Oceania, President Trump obviously colluded with Oceania to illegitimately win the election, and the cure for that is to turn over the ownership and the running of all US businesses to the US Government and everything will be just fine, because the US Government was so gosh-dang successful with Solyndra …

Best to all on a sparkling summer day, and come November, remember to vote …

84 thoughts on “The Fatal Lure of Democratic Socialism”