I got my first job in 1961, the summer after my freshman year in high school. I was fourteen.

I grew up on a cattle ranch in the Sierra Nevada Mountains of California, called the “Rough Diamond Ranch”. My summer job was working on a neighboring cattle ranch. Along with most everyone on ranches back then, I worked five ten-hour days a week, seven am to six pm with an hour for lunch. Well, everyone worked those hours except for the ranch owners. They generally worked sunup to sundown six days a week, with Sunday a day of rest.

First work of the day was moving the sprinkler pipes that watered a section of the hay fields. You want to get started early when you’re moving pipes—they’re aluminum and by late morning, they’ll burn your hands. 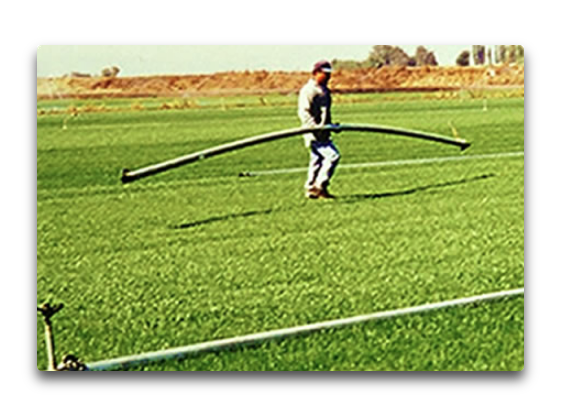 After that, we each got a pair of hay hooks from the barn.

These days they make hay hooks all slick, with “D” shaped handles and leather hand guards to make it easier on your hands, but back then they were a simpler tool.

Then one of the grownups started up the tractor with the flatbed trailer, and we went out to the fields to load hay bales into the trailer. Now, with my boots on and holding the hay hooks, I weighed about 110 pounds (50 kg) at the time. So I learned very quickly about moving heavy objects with my back and legs, and about how to swing and move with the swing. The grownups could just pick up the bales and heave them. I was not so fortunate.

The worst is when the trailer is almost full. You hook the hay hooks into the ends of the hay bale, lift it up, and start it swinging towards the trailer. Then you use your knee to lift it up towards your chest, get underneath it, and push it upwards onto the top row on the trailer.

Your reward, of course, is a shower of hay, straw, and foxtails that fall from what was the top of the hay bale and is now the bottom of the hay bale currently held over your head. It cascades over your head and face and down into your shirt and pants. Repeat for four incredibly long hours … and blessed lunchtime arrives.

Lunchtime occupations were simple. 1) Eat lunch. 2) Take off shoes, socks, t-shirt, pants, and underwear. 3) Take hay, straw, and foxtails out of underwear, socks, t-shirt, and pants. 4) Do Step 2 in reverse. 5) Go back to work.

Afternoons the heat got bad, well over 90°F (32°C), and the day seemed to stretch out into next week. Bale after endless bale, off the ground, onto the trailer. Midafternoon, ten minutes rest. We’d take off our t-shirts and put them into the creek, put them back on again. In fifteen minutes, they’d be bone dry.

Finally, after an eternity of hay and heat, it would be six o’clock. And after once again disrobing and removing stickers and foxtails from garments, ears, hair, and various bodily crevices, we’d be free until the next day.

For this, I was paid the princely wage of thirty cents US per hour. $66 per month. And I assure you, I was glad to have a job.

And before you say “But that was 1961 dollars”, here are the corresponding 2018 inflation-adjusted numbers.

And why did I get only thirty cents an hour then, which would be $2.55 per hour today?

Because, although it pains me to say it even at this late date, that is all that I was worth. I wasn’t worth a full grown-up’s wage. I wasn’t taking responsibility for driving the tractor. I wasn’t looking after the trailer maintenance. I wasn’t in charge of anyone else’s work. I wasn’t choosing where in the barn the hay would go. I wasn’t able to move hay nearly as fast as they could. I was just a small, easily distracted, slow field laborer, period, end of story.

I bring this up in the context of the current fight for a minimum wage of $15. Back in 1961, the minimum wage was a dollar an hour. And I was very fortunate that where I lived, nobody paid a damn bit of attention to what was then called something a bit coarser than “Federal Guv’mint bull-dust” emanating from the pluted bloatocrats in Washington DC.

So please, I implore you, stop agitating for a higher “living wage” or “minimum wage”. All that does is force the bottom end of the labor pool out of a job. It has had that effect everywhere that it has been tried, with Seattle being the latest victim of this insanity. A University study of their experience concluded, “Seattle’s minimum wage ordinance appears to have delivered higher pay to experienced workers at the cost of reduced opportunity for the inexperienced.”

No duh, as they say … and if the inexperienced can’t get started in the workforce and thus can’t learn how to put in an honest day’s work, there will be trouble ahead …

Here, we’ve had a foot of rain in two days, and the Russian River is ten feet over flood stage. I’m old enough to remember five years ago when Governor Jerry “Moonbeam” Brown claimed that California was in eternal drought conditions because of “global warming”.

It seems the raindrops didn’t get the memo.

PS—If after reading the above you still believe in the minimum wage, let me invite you to read my brilliant plan regarding how we can use the minimum wage to end all poverty in the US …

22 thoughts on “Well Below The Minimum”