The cure for anything is salt water — sweat, tears, or the sea. — paraphrased from Karen Blixen.

So there we were, having left both Hong Kong and the Philippines behind us, sailing the South China Sea again. From Roy, the Captain, I’d learned one of the more valuable rules of thumb in my life. In this case, it had to do with stocking the boat for the upcoming voyage.

Expect the best, and plan for the worst.

So I’d stocked the boat for a long sail, with extras of everything. When you’re at sea, if you run out of something you are out until landfall … so I planned for a voyage three times longer than I thought it would take.

Our next stop was to be Thailand, where we’d pick up the fifth man in the crew, Bert. He was inept at sea, but he was part-owner of the boat. When we’d left Hong Kong, Bert had gotten off the boat and flown back to Thailand to be with his wife. We were slated to go pick him up and then head out for the US.

As soon as we were in open water, I wanted to test the pistol I’d bought in the Philippines. It was a Model 1911 Colt 45 that looked like it was a survivor of World War II.

So we towed a dead propane tank behind the boat and shot at it. In the process, I learned a couple things.

First, it is VERY hard to hit something when shooting with a 1911 Colt 45 pistol from a boat. Not one of us hit the target.

Second, the pistol almost worked perfectly. Oh, it fired just fine, and it ejected the empty brass just fine. But it had a problem that will take a moment’s explanation.

Now, for folks who are unfamiliar with pistols, there are a few kinds. One kind, the earliest kind of pistol, you have to cock the hammer back each time before you pull the trigger. Each shot, you pull the hammer back until it clicks into place and is cocked. Then the trigger releases the hammer, firing the cartridge. This is called a “single action” pistol.

A semi-automatic pistol is commonly albeit incorrectly called an “automatic” pistol, as in “45 automatic”. A semi-automatic pistol like the 1911 Colt 45 works differently from a single-action. You have to cock the hammer to fire the first shot. When the gunpowder ignites, part of the energy is used to eject the empty shell and re-cock the hammer. So after having to cock the hammer for the first shot, for subsequent shots the pistol will fire as fast as you can pull the trigger. You don’t have to cock it between shots. 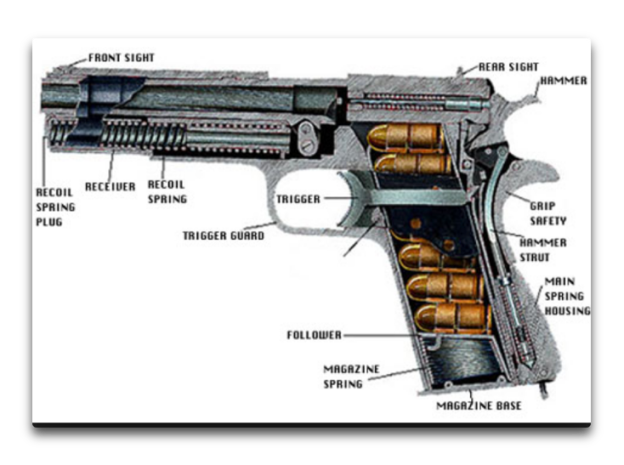 And how about the forty-five automatic I’d bought without having the opportunity to fire it? Well, it was a curiosity.

It would eject the shell, but it wouldn’t quite re-cock the hammer. It was too worn, and had been fired too many times.

As a result, I realized I owned a rare specimen of firearms history—a single action semi-automatic pistol. It worked fine, shot and ejected faultlessly, but the hammer had to be cocked before each and every shot. We concluded it must be some kind of evolutionary missing link between the two types of pistols.

But it would shoot, albeit slowly, but as well as any single-action pistol. And I will tell you that I felt much safer with a pistol than without a pistol.

The South China Sea including the Gulf of Thailand is an interesting hunk of water. Nobody is really sure who owns what. There are a whole raft of countries that border the Sea—Singapore, Malaysia, Indonesia, the Philippines, Thailand, Brunei, Cambodia, Vietnam, and China come to mind. And as near as I can tell, everyone claims everything in sight. Island ownership is greatly disputed. The maritime country boundaries are particularly indistinct. 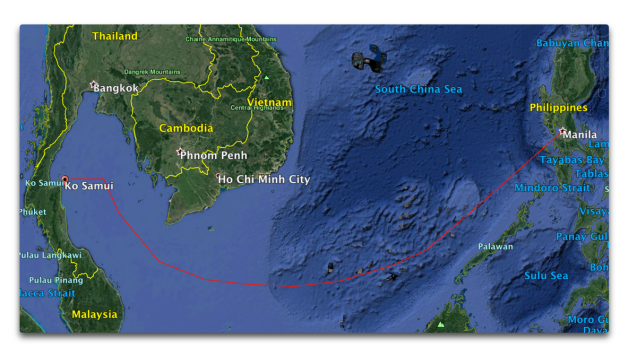 So we stayed as far from land as we could. And out there in the tropical waters, with each day warmer than the last, we came to something I’d never heard of—a sea of waterspouts. I don’t know whether it was just the time of year, or whether this was a common phenomenon, but we saw waterspouts, sometimes many waterspouts in a day, nearly every day for a couple of weeks.

I remember standing on deck one fine afternoon, with the sun shining, and when I looked around I saw no less than six waterspouts at one time. I stood transfixed.

Here’s an oddity about waterspouts and sailboats. For long ocean voyages, you set up the boat to self-steer. You adjust the angle of the sails and the position of the rudder in such a way that the boat stays at a constant angle to the wind. That way you don’t have to steer it. As long as the wind is steady the boat will sail a stable course at some certain angle to the wind.

And when a sailboat is set up to self-steer, it will steer itself right around the waterspouts.  I didn’t believe it when the skipper told me. He’d sailed around waterspouts before. He said the sailboat would dodge waterspouts without needing to be steered. I said “Whaa?”. Then we were sailing that night. The boat was self-steering. In the bright moonlight, we could see the great thunderstorms. And at one point, looking ahead I saw we were headed directly for a waterspout.

We got closer. We started to be able to hear the waterspout winds. But as we neared the spout itself, the winds circulating around the waterspout neatly diverted the boat. We self-steered in a slow half-circle round the waterspout, with clouds and moonlight alternately concealing and revealing the waterspout … and then it was behind us and we were back on the heading we’d been on before.

However, not everything was sunshine and moonlit waterspouts. This was the late seventies. Mao had just died in China. The North Vietnamese had overrun the Saigon Embassy a few years earlier. People were fleeing Vietnam in leaky boats. Pol Pot’s killing fields in Cambodia were in full industrial bone production. Things in the Gulf of Thailand were in flux, and definitely lawless. 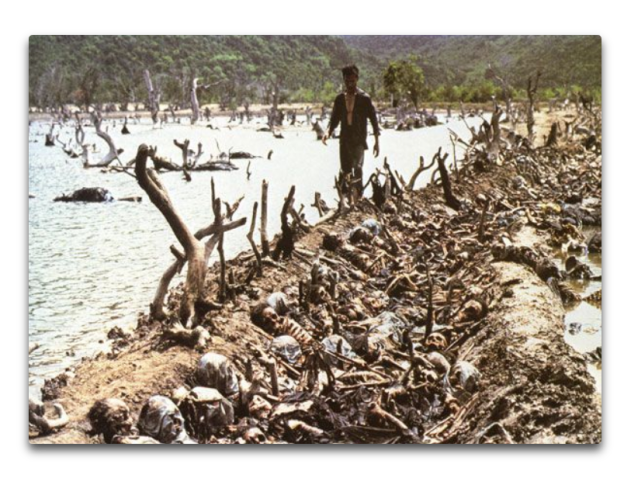 So you can bet we avoided anything like Cambodian waters, and you better believe we kept our eyes open for pirates or anyone else. We had good long-range radar mounted high up on the mast, and when we saw a ship on radar we turned and went the other way.

From Manila to where we were supposed to pick up Bert is 1,700 miles (2,700 km). Rule of thumb for ocean voyages under sail in tubby old boats is on the order a hundred miles a day for planning purposes. And after about seventeen days at sea, dodging waterspouts, we were approaching the island of Samui, usually referred to as “Ko Samui”. As you can see below, “Ko” in Thai just means “Island”. Bert was due to show up by boat in the morning at Ko Samui.

And in the morning there was a Thai fishing boat off of Ko Samui where Bert was supposed to meet us. It was squat, unkempt and far from graceful. When we got closer, we saw that there were about twenty fishermen lining the deck.

I was not reassured, however, when we neared the fishing boat and we saw that every other “fisherman” had an AK-47. Most were loosely slung over shoulders, but a few were pointed in our direction …

11 thoughts on “Onwards, Ever Onwards”