When last heard from, your obedient servant was on a sailboat somewhere in the mid-North Pacific Ocean, a boat with a busted engine that was loaded top to bottom with twelve thousand pounds of illegality. We’d already been a month and a half crossing and recrossing the South China Sea without touching land when we entered the Pacific Ocean.

The last land that we’d actually seen was at the border between the Philippine Sea and the Pacific Ocean. It is a crazy island called “Sofu Gan”. It’s shown at the very bottom of the map below.

Notice on the map that the island of Sofu Gan is also called “Lot’s Wife”. As you may recall from the Bible, against professional advice Lot’s wife looked back at the destruction of Sodom and Gomorrah. For that sin of reckless eyeballing, she was turned from a human personage into a pillar of sodium chloride.

And why is Sofu Gan also called “Lot’s Wife”? Here’s what the island looks like … 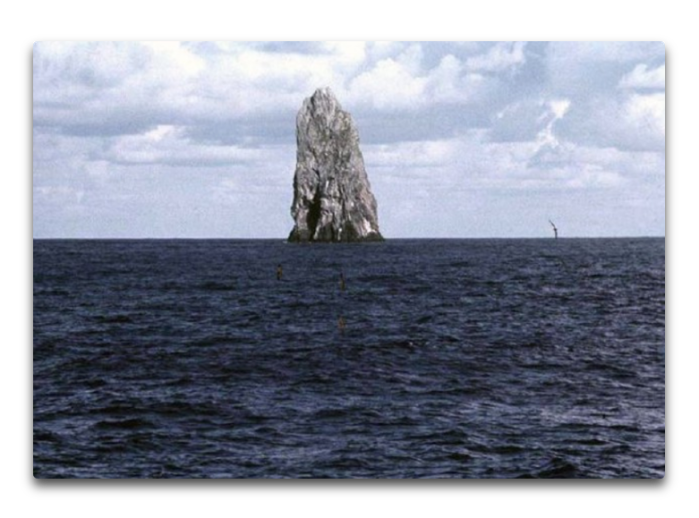 After leaving Lot’s wife behind, there was nothing but ocean. No land. No other boats. No boat lights, we sailed where the boats don’t usually go. We stayed away from the major oceanic highways, the great circle routes that the big boats follow from city to city and from continent to continent. Dark night after dark night, lit only by the moon.

My watch on the ship was from about five to eight o’clock in the morning and five to eight again in the evening. I took star sights at both dawn and dusk. So I spent a whole lot of time observing the wind and the weather and the moon during the hours before, during, and after sunrise and sunset.

Which bring’s me to the story of the moon wind. I’ve always felt close to the moon. I grew up on a remote cattle ranch surrounded by miles of forest, far from street lights. The nights were large and deep and very dark when there was no moon. The forest was quiet on moonless nights.

But when the moon was full, the forest at night was full of life. And in the winter with snow on the ground, it lit up the landscape like a spotlight. In the morning, we’d see tracks made by the night-time animals gamboling in the moonlight. It was clear that the moon had a huge effect on the animal life in the forest all throughout the year. The farmers in the area often planted by the moon. Whether that did any good I don’t know.

I do know, though, that the moon rules the ocean. Some years before the Pacific crossing I’m writing about here, I’d fished commercially at night for anchovies and for pompano off of Cannery Row in California, as I wrote about here. Every month we’d have to take a week off during each full moon. You couldn’t catch the anchovies during that time, they were too skittish. And the difference between night diving with and without the moon is startling. The underwater ocean comes to life with the moon.

Repetition can bring insight. So as night followed night as we crossed the Pacific Ocean, and I was taking star sights morning and evening, I had lots of time to observe the sky. I slowly became more and more attuned to the cycles of the sun and moon and the vagaries of the wind and weather. One of the things that I noticed was what I later found out was called a “terminator wind”. Great name, it sounds ominous. I didn’t know that at the time, so I just called the terminator winds the “dusk wind” and the “dawn wind”.

A “terminator wind” is a wind that blows across a “terminator”. The terminator is the moving line on the earth that divides day from night at any moment. Here’s a photo of the terminator from space. 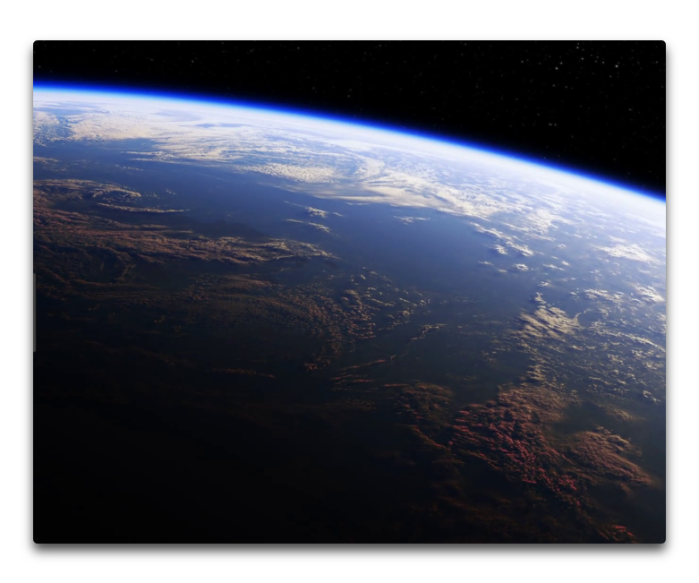 The terminator wind always blows from cold to hot, or from night to day. Or to think of it another way, the terminator wind always blows across the terminator towards the sun. This leads to a morning/night difference. In the morning, the dawn wind blows across the terminator towards the sun in the east. In other words, the dawn wind is always and everywhere a west wind. (Winds are named for where they blow from, not where they blow toward. Curiously, it’s the opposite with ocean currents. So a westerly wind will kick up an easterly current … but I digress …)

In the evening, on the other hand, the dusk wind blows towards the setting sun in the west. As a result, the dusk wind is always and everywhere an east wind.

The opposite direction of these two winds leads to a curious phenomenon. This is that if there are relatively steady overall underlying winds, the dawn and dusk winds will alternately oppose or increase the underlying wind. This is most visible when there is a light constant east wind. The dawn wind is a west wind, so it opposes the light east wind and often leads to a short period of relative calm around dawn. At dusk, on the other hand, the terminator wind blows from the east, so the dusk wind reinforces the underlying east wind and often leads to a brief gusty period around dusk.

Now, here is where the moon came in. After I’d spent enough nights at sea taking star sights and watching the comings and goings of the moon, I noticed that the moon has a terminator wind just like the sun. I started calling it the “moon wind”. 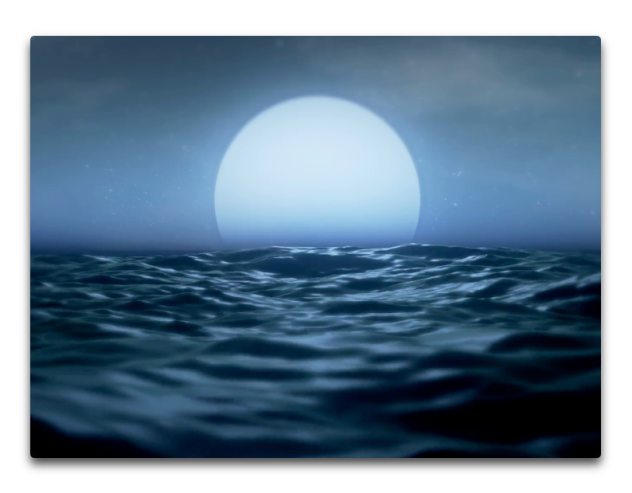 Back then, I didn’t know from terminators. This was long before I took up studying climate science. I was on a boat in the middle of the ocean, trying to make sense of what I experienced. So I made up a name, “moon wind”. I first noticed the moon wind when we were in the “doldrums”, a part of the ocean where the air is often quite calm, with many nights of no wind of any kind.

In those peaceful conditions, with the boat hardly moving at all, the terminator wind from the moon is quite apparent … at least it was to a sailor alert and hoping for any kind of wind in the doldrums. It obeys the same rule as the dusk and dawn wind, in that it always blows from cold to warm—in other words, it always blows toward the moon. Of course, it is much weaker and only detectable on very peaceful nights. On an otherwise perfectly calm night, the moon wind is a sliver of a breeze at moonrise or moonset, just enough to send small wavelets shimmering in the emerging or disappearing moonlight.

Since that time, I’ve very occasionally noted the moon wind on land as well. You need near full moon, preferably a large flat open area, and fairly calm conditions to be able to detect it. It helps to know what you are looking for. In light east wind conditions after the full moon, for example, the west wind at moonrise opposes the underlying east wind and is seen as a brief period of calm around the time of moonrise. But if the underlying wind is from the west, the wind at moonrise will reinforce that west wind and lead to a brief gusty period around moonrise.

I bring all of this up for several reasons. One is to point out that the earth responds instantly to even a very slight change in ambient conditions. We routinely overestimate the strength of the light coming from the moon. The light from the moon is on the order of a million times weaker than the light from the sun (with a full-moon peak at about six-thousandths of one watt per square meter (0.006 W/m2). The infrared from the moon’s surface is somewhat stronger than that, it’s somewhere around 0.03 W/m2. The sum of the two is only a bit above 0.03 W/m2. That’s thirty milliwatts per square meter, which is a very tiny amount in terms of the global energy budget.

And yet despite the change in energy being so small, you can still feel the moon wind at the moon’s terminator line, a wind that arises from that tiny energetic addition. What an astounding system. It is so stable that the global temperature hasn’t varied more than plus or minus half a percent in the last millennium, and despite that amazing stability, it is also so delicately balanced that thirty milliwatts of energy are enough to make the moon wind come up and shiver the surface of the silvery dark ocean …

Next, I also bring this up to remind myself of why it is that I took up the scientific study of the weather and the climate—because I greatly enjoy being out in the weather, and struggling to understand why it does what it does when it does it. Climate science has helped me to understand the various climate phenomena I’ve seen in the thousands of hours I’ve spent on the ocean.

Finally, I bring this up to express my awe and my wonder occasioned by being outdoors, up close and personal with the manifold outrageous weather phenomena. What a planet!

And so today, with the rain falling gently outside of my window, that is my wish for all of you— calm starry nights outdoors, laughter with good friends, a glass of grog, then the moon a pirate’s silver coin rising out of the ocean, and the moon wind coming up to blow your ship of life to the port of your dreams …