For those not familiar with my tale of aquatic lunacy, so far it has gone from Hong Kong to Manila, the South China Sea, Thailand, the Pacific Ocean, and mid-Pacific with a side trip through a dolphin party. And finally, we’re approaching the US.

A non-stop cargo sailboat trip from Manila to Thailand, then back past the Philippines and across the entire Pacific Ocean is a long, slow voyage. We were more than a hundred days at sea without touching land. The days in my memory fade into one another, leaving mostly an impression of blue—blue sky and blue ocean. The deep waters of the Pacific are clear blue in color. The clarity and color indicate that they don’t have a lot of life in them. The surface of the deep ocean is like the desert on land. There is not a lot of food, and only certain specialized creatures are able to live there.

We fished, of course. Our best luck was in the tropics where there are flying fish. In areas where there are flying fish, if you shine a light on your sail at night, they’ll fly into the sail and drop down on the deck. Flying fish are amazing any time, day or night. Seeing a school of them flying along when they see something and they all turn together as one, just like a flock of birds, is an amazing thing. 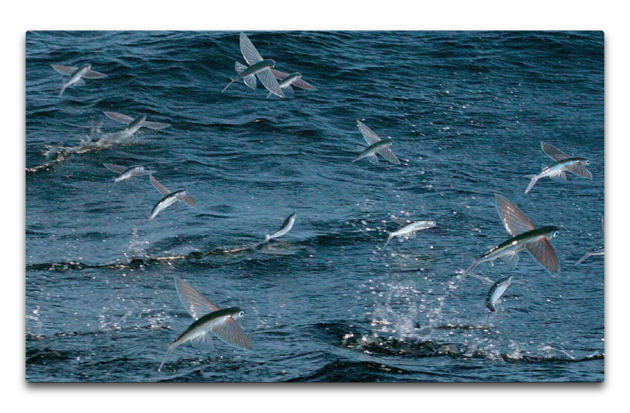 And there’s a reason they evolved wings—they taste good. So they make great bait. I wrote about using them as bait when I went traditional Kiribati fishing, in a post called Fishing Bootstrap Style. But in the North Pacific, we were out of the flying fish zone. So we fished the blue water with lures, and with cut strips of fish that we’d caught. And while we didn’t catch much, it made a great change from canned food.

But even the longest idyll must come to an end. And one day, I saw something I knew from back when I was commercial fishing for albacore. It was a wall of fog that ran horizon to horizon, and roughly from north to south. I’d seen that bugger before. So I knew it was marking the location of something I call the “blue-water line”.

Along the northwest coast of North America, the waters teem with life. There is so much plant and animal life in the water that the water is green rather than blue. This is because of a deepwater Pacific current that strikes the continent and is forced to the surface. Deepwater currents like these are full of the essential nutrients, minerals, and organics that are missing from the blue Pacific surface waters.

As a result, wherever you have water that is green with tiny marine plants you have everything else from anchovies to whales and in between. Salmon and cod and abalone and orca and flounders and sea lions and all of the creatures of the sea flourish in these rich waters.

Another important characteristic of the deep ocean currents is that they are cold compared to the surface waters.

The temperature is important in part because when the warm moisture-laden air flows in from the blue Pacific and hits the cold upwelling water near the coast, you get fog. And here’s the beauty part.

When I used to fish for albacore off of the California coast, we’d often leave the harbor in thick fog. And that fog would extend out maybe thirty or sixty miles. We’d continue to motor toward the west until, in an instant, several things happened at once.

• We crossed from green water into blue water, with no transition zone. There is a sharp, clear, precise demarcation line, what I call the “blue water line”, where the green plankton-rich water ends and the clear blue Pacific water begins. You can literally have one end of the boat in blue water and the other end in green water.

• We came through a vertical wall of fog into blue clear skies.

That’s what I call the blue water line, in all of its glory.

And to return to the trans-Pacific voyage, as soon as I saw that wall of fog, I knew a couple of things for sure.

One was that the blue water line meant we were getting close to the end of the voyage, for better or worse.

The other was, we were going to get cold very quickly.

And then we glided into the wall of fog.

In an instant, it was a different world. The horizon vanished. Sounds were muffled by the fog. The light was diffuse. The water was green and no longer clear, we couldn’t see down into it.

And after the Philippines and the Gulf of Thailand and the South China Sea and such warm lovely oceans … man, it was dang cold. The air was cold. The clinging fog was cold. The water was cold.

And after an eternity of sailing, we were getting close to the time for the offload. After the engine had died, we had a time without any radio. Then we’d figured out how to keep our radio and other 12-volt systems alive, using a small gasoline-powered generator to charge a 12-volt battery through a cobbled-together 12-volt transformer and rectifier setup. I was handling the radio, using ham radio frequencies. I used the call sign of my high school ham radio club.

So by radio, we were finally given the exact coordinates of the location for the offload. Scammers never like to let that information out too early, in case communications were compromised. Plus, people talk. The old saying is “Three people can keep a secret … if two of them are dead.” So the plans were kept secret until the very end.

From where we were, at the speed we could make, the chosen offload site was close. It meant sailing for one night and the next day, and then we’d get there just after dark. At least that was the plan, as long as wind and weather agreed. At this point, we really missed the dead engine … hard to keep an exact schedule when you are wind-powered. It’s the eternal insoluble problem with wind energy—intermittency.

That evening, the fog hid the sky and the horizon. No star shots. No moon. After dark, the surroundings were jet black. No light of any kind.

Plus the wind. Most places, you either get wind, or you get fog. Most places, the wind blows away the fog. But the endless warm wind sweeping in from the blue Pacific and hitting the cold coastal upwelling water is an equally endless industrial-strength fog generator. So in these waters, these beloved home waters of mine that I can see from my kitchen window of the house where I write this, in these waters we get fog and wind at the same time. Not pretty.

And as a result, the boat was moving along at a good clip, and we were flying totally blind. But at least we’d make the schedule if the wind held.

I did not sleep well that night. We were coming to the most dangerous part of the whole voyage.

In the morning, still foggy, no surprise there. No star shots. The unload should be that night. Since leaving Manila, we’d been at sea for a total of a hundred and sixteen days, which is three months and three weeks. I was more than ready to unload the boat and get back on land.

For navigation in the fog, we had a Loran receiver running off the battery. Loran is a scary old-time electronic navigation system. It’s no longer used, it was pre-GPS. The problem is that Loran can be way off, ten miles or so, through a phenomenon called “skip”, and you’d never know it was lying to you. We sailed towards where we thought the offload site would be. And at this point our dead reckoning became important again, to determine if the Loran was telling us the truth.

In the afternoon, the fog cleared for a while. We could see the coast. I took horizontal sextant measurements to establish our position. We verified that the Loran wasn’t lying to us … at the moment. Of course, that can change without any warning or any sign that it has changed. Loran is scary.

About three in the afternoon, we pumped up the two big Zodiac inflatable boats that we’d brought along for the offload. The plan was to use them to move the load from the boat to the shore. They were sixteen feet long (five meters) long, and each one would carry about a thousand pounds. They looked just like this photo of a Zodiac sitting on a trailer, right down to the black outboard … 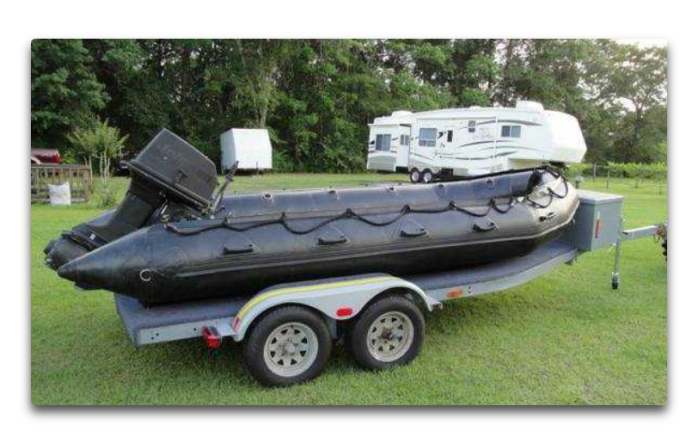 We figured that if we loaded them up and then cut them loose to run to the offload site separately from the main boat, then if the main boat got stopped and popped by the Coast Guard, we’d still have two thousand pounds that got through. That’s two million dollars worth of lawyers …

So we pumped up the Zodiacs, bolted a black forty-horse Mercury outboard motor to each one, put in the extra gas, and loaded them up with one-kilo silver blocks of compressed illegal plant matter. We covered them with the camouflage tarps that had concealed and protected them during the voyage. That cleared off the deck load, which made us look much less like … well … less like a cargo boat. Long John and SEALboy each got into one of the Zodiacs and off they went. They were going to keep us in view but from a distance. We had battery-powered VHF handheld radios to keep in touch.

After they’d left, the boat seemed almost empty with just Roy and me on board. We worked our way steadily in towards the coast. Every hour or so we checked in with the two guys in the Zodiac boats. After running for another hour or two, at one point late that afternoon I saw a shiny white boat come over the horizon. It looked vaguely military. I pointed it out to Roy and asked if it could be the Coast Guard.

“No”, Roy said. “The Coast Guard boats are all white with a red stripe”.

“Oh”, I replied, “you mean like that other boat over there?”, and I pointed to another vessel coming over the horizon and heading in our direction.

Here’s a photo of the very boat in question in all her glory, the boat that came over the horizon heading toward us that late summer afternoon forty years ago—the US Coast Guard cutter “Point Chico” …

Don’t want to see that!

15 thoughts on “White With A Red Stripe”