I was watching the TV series “Call The Midwife” tonight with my gorgeous ex-fiancée. It takes place back in 1964. Two of the characters were old gay men, very much in love in a society where it was still “the love that can’t be named”, the love that at the time was still very illegal both in the UK and the US. And it reminded me of a trip that I took around that time.

Back in 1966, at the age of 19, I hitchhiked from San Francisco to Coconut Grove in Florida. Why? Of course, to see my girlfriend. And after watching the TV show, I got to thinking about that trip tonight—it was the first time I’d ever actually talked to men that I knew were gay.

I have to assume that there were gay men around when I was a kid and a young man, but if so they were firmly in the closet. And although by that time I’d worked as a cowboy, and starved in Alaska, and played guitar and sung in nightclubs in Greenwich Village in New York, the truth is that I was a total naif regarding gay men …

The first gay guy I met on that trip picked me up outside of Needles. Don’t know if you’ve ever been there, it’s a small town right on the border between California and Arizona, but it’s … well … bleak. Oh, not the city itself, it’s on the Colorado River. But the surrounding turf looks like this:

After waiting a while for a ride in Needles, a guy picked me up. After driving maybe ten miles or so, he pulled some pictures out of his glove box, unzipped his pants, and began to engage in what in my youth we called “spanking the monkey”, or perhaps “hitchhiking to Chicago” complete with the appropriate hand gestures.

Now, that didn’t bother me … well, at least not too much. After all, I was a man on a mission, and any ride was a good ride … but when he asked if I’d like to take over the task “at hand” from him, I politely declined.

He was not at all happy with my answer. He pulled the car over, and told me, rather brusquely I thought, to “get out my damn car”.

He hooked a U-turn and headed back to Needles. I looked around. The place where he left me looked like this in both directions: 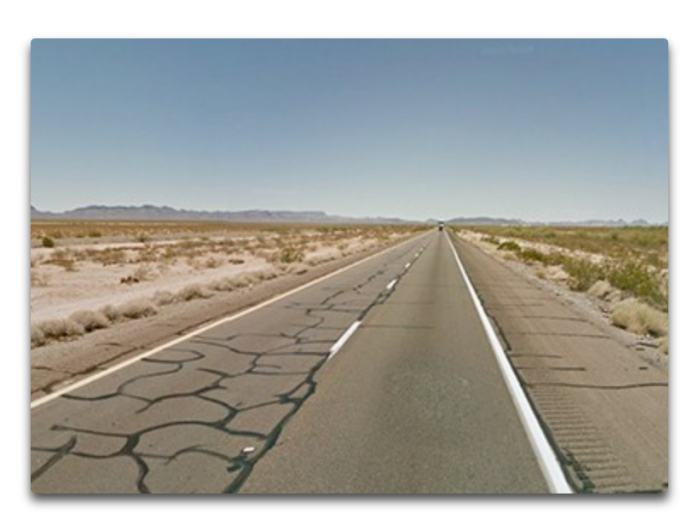 Now, I’ve hitchhiked thousands of miles in my life. Heck, by the time I was a junior in high school (11th grade), I’d already hitchhiked over a thousand miles. So even back then I was relatively expert on what makes a good spot to hitch. And I’ve got to say, this was one of the worst spots I’d ever hitchhiked. The problem was the speed. Every car was doing 70 mph (110 km/hr) or more, and when you’re going that fast, you don’t want to slow down for anyone.

Plus it was hotter than the proverbial place of eternal marshmallow-roasts, and I hadn’t expected to be needing water …

Eventually, of course, someone picked me up, parched and parboiled, and the trip continued. I got to Houston and was hitchhiking at night. It was kind of a skeevy part of the outskirts of town. I was exhausted. There was nobody on the road, and after a car went by I’d lie down to wait for the next car.

Well, I was so tired that I failed to notice that a car actually stopped. I laid down again and was nodding off. The car backed up right next to me and honked his horn. I jumped up, with my heart racing, and opened the car door and looked inside. The driver was a huge black guy. I hadn’t lived amidst people of color at that time, just the melanin-deficient variety, and I had lots of racial stereotypes in my head. I got in the car with the man-mountain, and I’d be lying if I said I wasn’t scared.

The human bear reached over and shook my hand, his hand totally engulfing mine. He introduced himself. As we drove, he said was the pastor of a medium-sized black church, and he invited me to come to their Sunday service. I apologized and said I was moving down the road so I couldn’t make it … while apologizing inside for the injustice that my childish prejudice had done to a good man.

So we talked about his life, and my life, until he dropped me off on the other side of town. From there, I hitched on down through New Orleans and into Mississippi.

It was nighttime again, a hot muggy Southern night with not many cars, so I was happy when an older guy picked me up. But after a bit, he asked me, rather politely I thought, if I liked men.

I thought “uh-oh … gonna get left on the roadside again”. But that wasn’t the case. He took my rejection quite calmly. He said he hadn’t planned to drive that far, but he’d take me to the next town. So we drove, and he talked about his world.

It turned out that he’d lived his whole life in northern Mississippi as a totally closeted gay man. He had a long-time partner, and he never cruised around propositioning young men. The two of them were happy, he said, even though they could never be honest in public about their lives or their love for each other.

But then, about six months before, his partner had died. And to me, the really moving part of his story was when he said that he’d been unable to mourn him properly. He said he’d seen people whose husband or wife had died. They could dress in black, and weep without any reason, and talk openly about what they had lost.

But all of that was denied to him. He had to pretend that it was just a friend who had died, and that it didn’t tear his heart apart to talk about it.

And so, in his all-too-human need for compassion and companionship, he’d taken to driving to the southern part of Mississippi, far from the little town he lived in, and picking up young men on the highway …

Until that point in my life, I’d never really thought about gay men and women as being just like you and me. Somehow they were strange alien creatures of the night who didn’t have the same emotions that I had.

But as I was riding through the warm, almost tropical night, listening to that poor tortured man pouring out his heart, speaking of the lost love of his life that he was unable to mourn, I saw past my fears and my lifelong prejudices. I saw that under the skin, we’re all the same—we all love, we all fear, we all laugh, and we all mourn those we’ve lost, whether we can show it or not.

True to his word, he drove me to the next town and dropped me off at a good spot to hitchhike.

Before getting out, I wished him well from the bottom of my heart, thanked him for his kindness, and I said I hoped he found another true love. He smiled sadly, and said in his courtly southern manner that it had been his pleasure to meet me.

And with that, I parted company with him, knowing full well that I’d just had a stroke of immense good fortune, and aware that I’d never look at being gay in the same way again.

So in that spirit, on this lovely spring-like evening, I offer my very best wishes to everyone, no matter who you might like to sleep with,

12 thoughts on “Hitchhiking Into The Unknown”