Let me start by thanking Richard Tol, Marcel Crok, and everyone involved in the ongoing discussion at the post called “The Bogus Cost of Carbon”. In particular, Richard Tol has explained and defended his point of view, giving us an excellent example of science at work.

In that post I discussed the “SCC”, the so-called “Social Cost of Carbon”. There are many things I don’t like about it, including the name itself which assumes that costs outweigh benefits. But I kept having this feeling that I was missing something fundamental, and today I realized what it was.

Let me start by defining and discussing the concept underlying the Social Cost of Carbon, the idea of “monetizing externalities”.

In general, the market sets a value on something, say fast-food hamburgers in paper takeaway wrappers. The burger might cost $4.95 … but there is also an “external” cost that is not included in the $4.95. This is the additional cost to the city of cleaning up the takeaway wrappers thrown out of car windows by yobbos of various flavors.

So picking up the trash is an “externality” to the cost of the burger. And we can “monetize” it by figuring out how much the extra trash costs to pick up, and dividing that by the number of burgers sold. This might give us something like three cents extra per burger that is an external cost of fast-food hamburgers.

So far, so good. Of course, we never want to just consider the costs, we also need to consider external benefits. Like external costs, these are benefits not reflected in the cost of the burger. For example, a fast-food joint brings additional traffic to the city, and those additional people will spend some money at other local businesses. And we can “monetize” this in the same way, by collecting data on the change in traffic and sales at local businesses before and after the burger joint opened. We might figure out that the value of that external benefit is five cents extra in local business per hamburger sold.

This is how a cost/benefit analysis should work. HOWEVER, and it is a big however, there are a number of pitfalls in practice, some of which I discussed in my previous post. One I did not discuss is the “Law of Unintended Consequences”, which states that there are always unintended consequences of every action no matter how sure we are of the outcome.

For example, people were greatly concerned that the introduction of snowmobiles in the Arctic would decimate the caribou population. With untiring machinery instead of dog teams, the hunters could follow the caribou wherever they went, keep up with them, catch up with a fleeing herd, run them to exhaustion … it was clear that the snow machines gave the hunters a huge advantage they hadn’t had before.

In hindsight the reason was obvious … snow machines run on gasoline, and dog teams run on … caribou meat …

To bring this back to the SCC, increasing CO2 is known to have caused a “greening” of the earth. Current CO2 levels are far below optimal for plants, so increasing CO2 yields more plant growth, the “greening” in question.

This has been measured from satellites, and is on the order of a 10% increase in plant productivity.

Now, this is an estimate of an ongoing year-after-year external BENEFIT of increased atmospheric CO2 based on satellite measurements of chlorophyll as well as greenhouse experiments showing increased growth with increased CO2.

Which brings me to the SCC, the social cost of carbon. On the benefit side, we can start with a trillion dollars in increased production based on satellite measurements and greenhouse experiments. But what about the costs?

As far as I know, there is not one cost in all of their accounting which can objectively and scientifically be ascribed to increased CO2.

Yes, we have a theory about the relationship of CO2 and temperature … but the best computer models of that theory have failed spectacularly at forecasting the future. It’s curious to me. People understand that computers have not allowed stock brokers to outguess the stock market. But they still think that computers can outguess the climate, which is far more complex. In any case, to date the best models of the theory have not yielded true predictions of the future.

But it is worse than that. None of their claims are based on the past. All of their costs are the calculated present values of imagined future events. The chain of untested assumptions is quite long. Here is the chain:

Their so-called “costs” are based on what they think carbon dioxide MIGHT do to the temperature at some unknown future time. These in turn lead to guesses about what that imagined temperature rise MIGHT have as knock-on effects. In addition, the “costs” are also based on the future date on which said imagined knock-on effect MIGHT happen, the actual costs that MIGHT be associated with that effect, and a discount rate that MIGHT match the actual future rate.

So we have five separate chained predictions about the future.

The result of all of this is that on the benefits side we have measured observable current benefits.

And as a result of this uber-subjective process, various scientific authorities making various predictions have gotten results ranging from negative and zero to $1500 per tonne of carbon. That’s not science, that’s throwing darts. 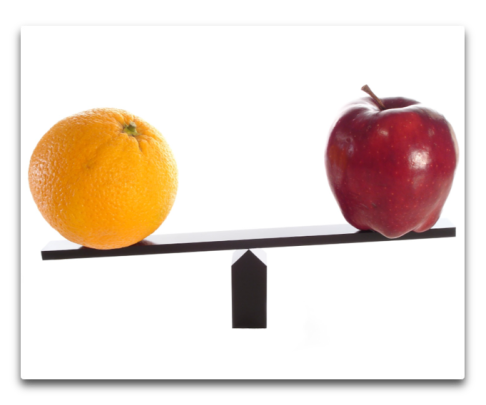 This is what I meant by monetizing apples and oranges.

On one side we have an observable present benefit.

On the other side we have an imagined present cost based on five separate independent chained predictions of the future.

I say that it is not valid to compare those two values directly..

17 thoughts on “Monetizing Apples And Oranges”