Sooo … here’s a fable for our time. Suppose some guy gets into a car wreck in his lovely old car. It’s pristine and perfectly preserved 1963 Ferrari, a very valuable car. He’s had it just sitting in a garage for decades, and one day decides to take it for a spin.

This proves to be a bad choice, as he proves once again that two solid objects cannot occupy the same volume of space at the same instant.

The Ferrari is not totaled, but it needs major and expensive work to return it to its original condition and get it back on the road.

Unfortunately, when he checks he finds out that he had never bothered to modify his automobile insurance policy to include the Ferrari. His Tesla is covered, as is his wife’s Prius … but the Ferrari has no insurance.

So he goes to Geico, and he asks them to sell him collision insurance for his Ferrari. They say “OK”, and tell him it will cost roughly a thousand dollars per month … and because of the claimed value of the car is pushing a million dollars, they send their top agent to go to inspect the Ferrari before insuring it. 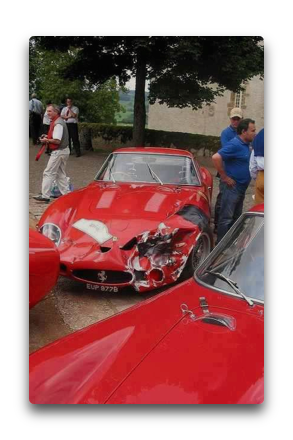 Of course, when she sees the car, she says “Wait a minute … this car has already been in a collision! We can’t sell you collision insurance”.

“Sure you can”, he says, “you insured all of my friends’ cars. It’s not fair to single out my car!”.

“Look”, the Geico woman says, “it will take over a hundred thousand dollars to fix your car. We can’t sell you car insurance for $1,243 per month starting now, you’ll just get your car fixed and stop paying.”

“No”, he replies “I have a right to be insured. You insured my wife’s car. This is simply discrimination.”

“Say what?” the woman asks. “How on earth is this discrimination?”.

“It’s discrimination because you are refusing to sell me insurance on the basis of a pre-existing condition!“ he says, and folds his arms in triumph.