People keep saying that they don’t understand it. The President of the US (POTUS) does something that that for an ordinary politician would be fatal, like say attacking his own AG … and his support among his followers doesn’t change one bit. The media declares themselves mystified by this, the Democrats can’t understand it, the talking heads can’t figure it out. The consensus seems to be that Trump supporters are just fanatical … not.

Me, I call the reason for this unchanged support the WOTUS Effect. And legislators and media people generally don’t understand the WOTUS Effect because of the coastal bubble that so many commenters inhabit.

So … what is the WOTUS when it is at home? It is a piece of bureaucratic overreach whose full name is the Waters Of The US rule, or WOTUS … still haven’t heard of it? That’s part of the WOTUS effect.

Here’s the backstory. The Environmental Protection Agency was originally created to clean up what at the time was a fairly dirty environment. And at first, it did good work, cleaning up our air and water.

However, once its job was mostly done, the usual governmental nonsense set in. Over the years, in true bureaucratic fashion, the EPA has expanded its jurisdiction. And at the same time it has become unbelievably corrupt, with the leaders in bed with environmental groups, cutting corrupt deals with them using secret and illegal email channels,  and engaging in the vile “Sue And Settle” practice.

Not only that, but they use “independent” scientific data that comes from groups on their payroll. That doesn’t even mention their immoral and illegal practice of exposing people to what they claim is “deadly” PM2.5 particulate matter to try to justify its regulation. However, real science shows no such effect of PM 2.5.

And as a result, out in the countryside where the regulatory rubber hits the road, the EPA has become one of the more hated branches of the US Government. People can smell the rot from miles away.

So with that as a backdrop, we come to the WOTUS question. When the EPA was created, it was given jurisdiction over the “navigable waters” of the US. Now, that has a clear meaning that is defined by US Law, viz:

Navigable waters of the United States are those waters that are subject to the ebb and flow of the tide and/or are presently used, or have been used in the past, or may be susceptible for use to transport interstate or foreign commerce. A determination of navigability, once made, applies laterally over the entire surface of the waterbody, and is not extinguished by later actions or events which impede or destroy navigable capacity.

Simple enough. “Navigable waters” are the ocean plus rivers big enough for commercial boats. That’s what Congress said the EPA had jurisdiction over.

But noooo, the EPA decided that wasn’t enough for them. So by bureaucratic fiat alone, they decided that their jurisdiction ALSO included all of the smaller streams and creeks, under the rubric that they were “connected to” the navigable waters … and to its shame, rather than kick it back to Congress, a very liberal Supreme Court rolled over and played dead when people complained.

And while you think the EPA folks would be happy with that, noooo, that wasn’t enough. So the EPA put forth a regulation called the WOTUS rule, which extended the EPA’s already broad over-reach to include even ditches, seasonal ponds, and temporary wetlands. Basically, if you spit on your land, they could come and regulate it as part of the waters of the US.

Now, does this have any effect within the great Democratic stronghold of the coastal cities? Heck, no. It means zip to a city dweller.

But for a farmer in Nebraska or a rancher in Idaho, this change basically meant that the already-hated EPA could send a heavily armed agent on to their farm or ranch at any time, force them to change what they were doing, and arrest them and try them if they refused.

And they were both very mad and very scared. 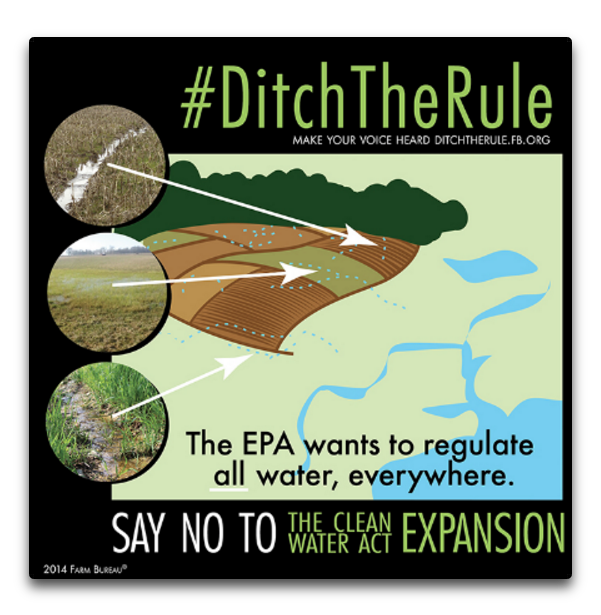 To understand the feeling of the farmers and ranchers, imagine what would happen if the EPA tried that in the cities. I mean, you have water in your faucets that is connected to some navigable river somewhere, and that tenuous connection was the exact justification for the WOTUS rule extending EPA jurisdiction to ditches and seasonal wetlands.

So, suppose the EPA asserted that they could send an armed agent to enter your house at any time to examine your faucets and toilets … no question you’d be very mad and very afraid too.

Given all that, what is it that I am calling the WOTUS Effect?

Within about a month of taking office, the President issued the “Presidential Executive Order on Restoring the Rule of Law, Federalism, and Economic Growth by Reviewing the “Waters of the United States” Rule”. Eventually, this will lead to the total rejection of the WOTUS rule.

And make no mistake. Even though you likely never heard of this, for many, many Trump supporters this was huge news. There was rejoicing everywhere except the blue city bubbles. So here’s what I’m calling the WOTUS Effect.

If a man frees you from something that made you both mad and scared, he’s secured your vote for a long time.

Me, I’m in the same situation regarding not only the WOTUS rule but also a couple of other issues. I was both mad and scared by Democrat’s support for the “TPP”, the Trans-Pacific Partnership. It was to be an extension of the horrendous NAFTA-style globalization that has already badly damaged the US economy. I was terrified that I would be passing on to my descendants a twenty trillion dollar debt, and doing it with the US manufacturing sector basically destroyed. That is a recipe for the end of the US.

I was also afraid of what would happen to our judiciary if Hillary were elected. Instead, we got Neal Gorsuch. Me, I’m a four-corners textualist, so once again President Trump allayed my fears.

All of this meant that when Trump kept his promises and ended the WOTUS push and canned the TPP and got Gorsuch confirmed, he secured my vote for quite a while.

Now, of course, there are limits to the WOTUS Effect. I’m not into “high crimes and misdemeanors”, that’s what impeachment is for.

But at this point, I and many other voters don’t care one whit what happens with the bogus Russian hype for which we have zero evidence, or with the White House intrigue that has the talking heads perpetually exploding, or with the various daily legislative and media conniption fits.

We’ve won big already, so we’re willing to overlook what to us are trivial issues.

PS—I have been an environmentalist since the time of Rachel Carlson, although not a follower of hers … but not one of the watermelon environmentalist, green on the outside and red on the inside. So this is not an argument against true environmentalism, which I support. Instead, it is an indictment of the venal, corrupt EPA, where people pretend to have the moral high ground while they work against our national and environmental interests.

43 thoughts on “The POTUS and the WOTUS”