My walk through town today was as productive as ever. Today, I found out that the Solomon Islands are much further behind in these politically correct times than I thought. They clearly haven’t gotten the 21st-century news flash from the American Social Justice Warriors. Here’s the poster I saw that brought this to mind: For unknown reasons it reads from bottom to top … hey, it’s the Solos. Kinda makes sense, though, in that it goes from near (bottom of any photo) to far (top of any photo).

So in number 2 he’s filled out Form b and goes to the next desk, where he asks “Wat moa?”, which is “What more?” The lady says:

Now, “bae” is a curious word in Pijin. Pijin has no tenses. The time of occurrence is indicated by the helper words “bae”, as in “bye and bye”, and “finis”, as in “finish”. So a conversation might be:

“Bae iu go long taon?”, some one asking “Bye (in the future) you go long (to) town?”. Note that the verb “go” is not conjugated, either as to time or number. This is characteristic of verbs in Pijin.

The answer might be “No, mi go finis”, which is “No, me go finish” meaning I already went to town.

This means that the lady in panel 3 is saying “Next (bae) you take photo, finger print, ID card”.

In panel 4 he says “Mi regista finis”, which as Pijin speakers you can all translate. And in panel 5 he goes happily on his way.

These poor Solomon Islands folks! Here they are in total ignorance of the fact that voter ID cards are terribly racist! How could they have missed that most obvious fact? Because here in the US, we’re very clear about the evils of photo ID, viz: 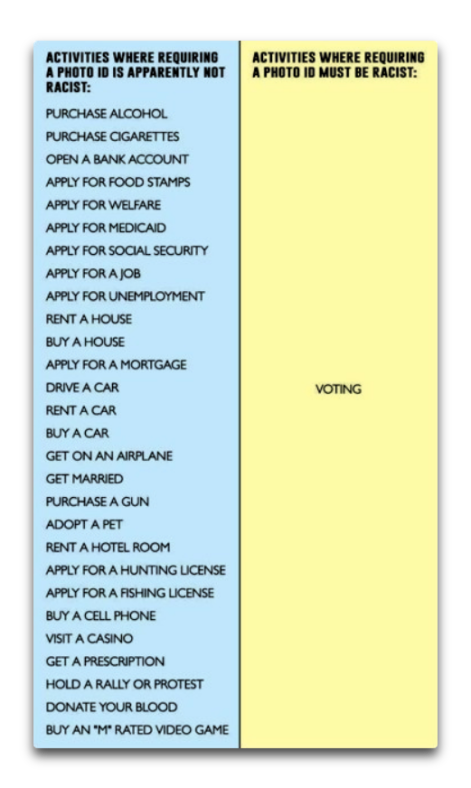 How tough is that to remember, after all? You only have to hold on to one thing …

On a more serious note, I was greatly amused by yesterday’s election in the US State of Alabama. It managed to do two supposedly contradictory things at once.

1. The turnout among Alabama black voters was one of the highest ever recorded in the state, and

2. Alabama has one of the toughest voter ID laws in the US.

Before the election the Huffington Post huffed in a post that “There Are Huge Obstacles To Casting A Ballot In Alabama’s Special Election” … oops. Seems folks in Alabama didn’t get the SJW message any more than the Solomon Islanders did …

So that’s the hot news from the South Pacific, they’re so far behind the times that they are way ahead of us. Me, I’m heading up the hill for a motu. Sorry, no crocodiles allowed.

My best to all,