[Well, after two days racking my brains and resetting every setting, I figured out why my internet connection was so slow … not pokey Solomon electrons after all. Turns out I’d put a big file into DropBox and every time I logged on it jammed up the gears trying to upload it. So I’m back online here in Gizo at a ripping 1.5 Mbps for downloads. Like last night, there’s lightning and thunder all around. Here’s my post from yesterday …]

You know how there are jobs that somehow you just keep postponing? Not really bad jobs, just jobs you’d rather not do today?

I’ve been doing a survey of the ICE so it will be ready whenever Mike, the owner, decides to take it for a spin. It’s a long process. You have to look at everything from the bottom of the keel all the way up to the masthead … well, the latter is the job I’ve been postponing.

Now, I don’t have any particular fear of heights. But as the days went by, there was always some good reason to not climb the masts. I say masts because the boat has two of them, the mainmast and the smaller mizzenmast. Most days it has been too rainy—I had no desire to climb a slippery wet mast. And on the days it wasn’t too rainy, it was too hot, and there’s no shade up top.

But today? Last night I thought “If it’s not rainy, I’ll start early so the sun won’t be too hot”. And when I got up, it was clear, but with a band of clouds covering the sun. “Perfect”, I thought, and I put on shoes instead of sandals for the first time since I arrived … you don’t want to be thinking about your footgear when you are somewhere that you could fall to your death by catching a sandal strap …

Despite the early hour, it being Monday morning, there was a line at the gas station behind the ICE … we’re tied up to the main fuel dock.

As I said, everyone travels by small boat here. Check out the old lady near the camera …

But of course, Murphy is not dead. So as soon as I started up the mizzenmast, the sun broke through the clouds in all its feral glory, and I started to sweat. The only good news in the deal is that the ICE has mast steps all the way up both masts. They’re of a clever folding design, so they are out of the way when not in use.

Here’s a mast step in the closed position …

And the same step in the open position … 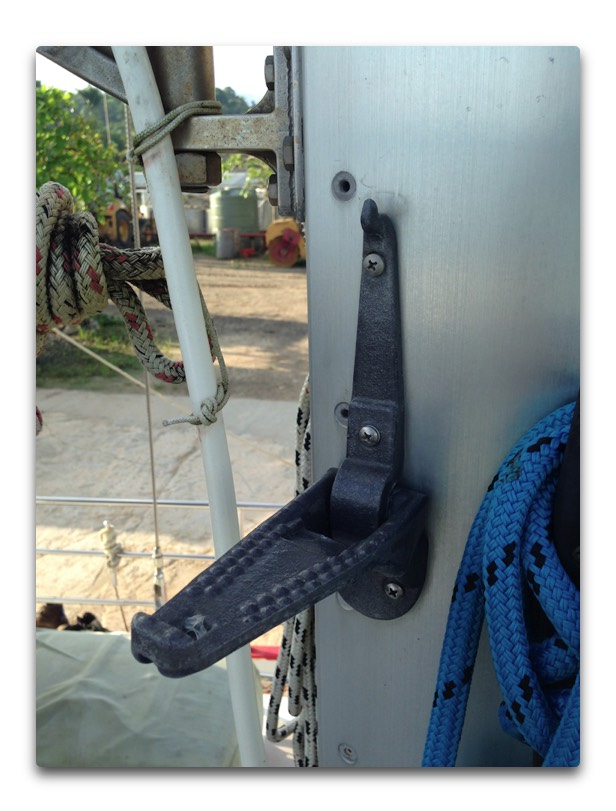 And as a reminder, the dimensions of the challenge … the mainmast is the taller one in front, the mizzenmast is the shorter one in the back.

Now, some folks like to wear a safety harness when they climb a mast. After going up a number of masts both with and without safety gear, I finally gave up the harness while single-handing a 21-foot boat in a storm. One of the halliards, the ropes that raise and lower the sail, got jammed at the top of the mast. Single-handing on the ocean is implacable—sometimes there is something that must be done or you will die, and there is no one else to do it. It’s a position that people are rarely in onshore—usually there are both other options and other people.

But not when single-handing. So I put on my safety harness and looped the safety line around the mast, figuring to pull it up with me as I went.

On that boat, there were no steps on the mast. So I started shinnying up it right at dusk. It was much, much harder than I expected. When I got up to the spreaders, the horizontal pieces that brace the mast about halfway up, I could at least rest … but when I went to pull up my safety line, it was caught on a winch down on deck. With no other option, I cut it loose. I knew that there was no way that I could climb the mast twice, I was too exhausted. I went up the rest of the way without anything keeping me from falling but my monkey ancestors. The sea was rough as guts. When I finally got to the very top after what seemed like hours of work but was only minutes, my weight was enough to make the boat lean first to one side, then the other, like a drunkard trying to walk a straight line … it truly felt like the ship was actively trying to shake me off its back into the ocean.

I cut the sail loose, slid down the mast, collapsed in a heap, and haven’t worn safety gear up a mast since. Even just the harness itself is a pain. It’s always getting caught on some bolt or some line at the most inopportune moment.

My job was to take photos and examine all of the bits and pieces for corrosion or cracking … and take pictures. I’d tied and taped a bit of line to my camera. There’s an old sailor’s saying, “One hand for the ship, and one hand for yourself”, and it was as true today as in 1750. Except in this case, it was one hand for the camera … here’s the top of the mizzenmast. It’s looking along the “triatic” stay, the piece of wire rope connecting the tops of the two masts.

Not all that perpendicular, but hey, one-handed. And here’s the view looking down from the top of the mizzenmast … the round objects are radars.

By the time I got back down to the deck, I was totally drenched in sweat … but there was no point in stopping to cool down, because the day was just getting hotter. Here’s a look at my next challenge …

Climbing the mainmast was trickier than climbing the mizzen, you have to switch sides once you get up to that funny basket-like structure that you see halfway up the mast. The mast steps are only big enough for one foot, so switching feet is a pretty little dance.

That basket structure is the “crows nest”, which is where you go for the best view of say reefs and shoals. And on long voyages, I sometimes have gone up there just to get away from the rest of the crew …

It is also a great place for an overheated man to stop for a rest. Which I did.

I must confess, when I stopped there and looked up at how far I still had to go, I thought “Man, I could just crank up the zoom on my camera and take pictures and go down” … but I’m a man who is honor-bound to do what I said I would do and to finish what I’ve started. So up I went again, to the very top.

(I’m writing this after dark. A big gust of wind and rain hit the boat just now, heeling it over. Thunderstorm working its magic, hang on, I’ve got to see if everything is still as it should be … … OK, a walk around the boat shows that things are still good. Trees on shore are whipping around, the boat is bouncing, rain is cascading off the bridge deck down the windows, life is good, back to the crows nest …)

So up I went to the top, been there, done that, got the pictures to prove it.

I started back down. Did I mention that Murphy is not dead? I get all the way back down to where I’m safely in the crows nest, and I look up … I didn’t fold up one of the top mast steps. Grrrr … so, back up I have to go, fold out the steps that I had remembered to fold up, up to the very top again. Fold the last step, start down again, folding as I go … back to the safety of the crows-nest.

After I’d stopped saying bad words, I set about taking a few pictures and a video of the view. For me, the view from the crows-nest is one of the best in the world. Here’s the fuel depot below me …

Because of the difficulty of getting a fuel tanker to come to a very remote area like the Western Province, Don has started bringing in fuel in the container-sized “tanktainers” you see in the foreground. He pumps from there into the storage tanks and then sends the tanktainers back out on the next ship.

And here’s a view of the waterfront running between the fuel depot and the town. Looking into the sun so it’s kinda washed out … and so was I … 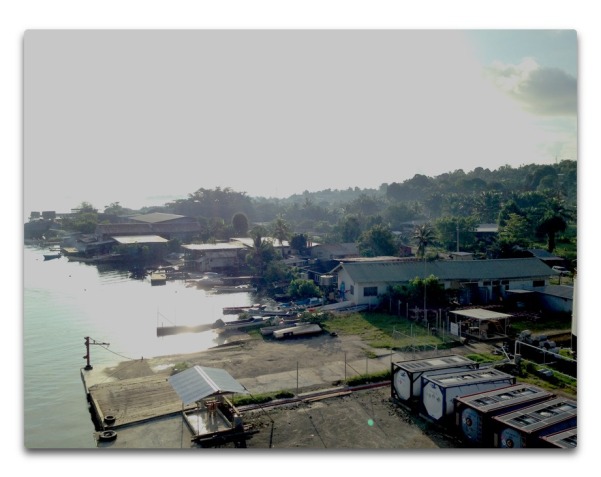 I also took a video. It’s pretty shaky, because, well, boats move around a bit, especially when you’re up the mast. But posting videos will have to wait until I get somewhere with faster internet yet, each one is about 25 megabytes …

(Lightning has been continuous for ten minutes or more … here’s today’s weather forecast. The thunderstorms have hit a bit early. Looks like its a good thing I climbed the mast today, three days of thunderstorm warnings …)

And a final shot, looking down from the crows nest.

Unable to postpone it any longer, I left the safety of the crows nest and started down the mast. When I got almost to the deck, on the very last step, I looked up … this time I said really bad words. I said “Muthaforking corkstacker, one dang mast step hidden around the mast at the crows nest, I didn’t see it, how dumb can a man be?” I abused the entire tribe of mast steps and all their ancestors, descendants, and relatives root and branch, along with Mr. Murphy and more than anything my own stupidity … and then I climbed back up, unfolding steps as I went up, and this time re-folding each and every one of them on the way down.

At that point I remembered that I’d asked Abraham yesterday to refill the fresh water tank, but in best Solomon fashion he’d put it off for a day … no water. So I just stood, buck naked, in front of the aircon until my body temperature dropped out of the triple digits …  hey, do I know how to have fun or what?

The good news was, regardless of all of that, I’d inspected each of the fittings, I’d gotten the pictures, the job was done and dusted, and I didn’t have to go up again.

After resting and making some breakfast I walked into town. I said hello to my favorite girlfriend, “Mone, bes gelfren blong me.” or “Morning, best girlfriend belong me”. “Mone, preti boi”, she replied saucily, and the half dozen onlookers cracked up.

It was a fun and productive town trip. After a couple of false starts and bad leads, I actually found ground coffee. Came back to the ship, made a fresh pot, and worked on my survey report. The mast fittings were the last part of the puzzle.

Still raining here, but not sluicing down like before. No lightning for a bit either, the storm has walked on down the line … all that’s left now is the warm comforting sound of the tropical rain falling on the wheelhouse roof. I’m gonna take off the saddle and head for the barn, I’m done.

… next morning. The insides of my legs are sore from wrapping them around the mast. The storms have gone away, but it looks like they are still lurking. Life is good.

Best wishes all around,

9 thoughts on “The Crows Nest”