I’m a great supporter of racial and sexual and ethnic and all other kinds of human equality. Mostly that’s because of my grandma, my mom, and the women it has been my pleasure to live with and hang around with in my life. None of them, including my gorgeous ex-fiancee who I’ve lived with these 38 years now, would put up with a minutes-worth of that kind of divisive nonsense. And it’s also because I have a raft of gay people and people of color and of different ethnic backgrounds in my immediate family, like many families these days we’re an increasingly cosmopolitan bunch.

Despite that, I’m a member of one of the only two groups that it is still OK to talk trash about. I mean, you can’t rubbish black people, and that’s a good thing. And you can’t trashtalk women, also a very desirable and long overdue change. You can’t tell Polish jokes, which is a fine thing for society, particularly if you’re Polish.

But there are two groups you can still talk rubbish about without anyone raising so much as an eyebrow, and their middle name in both cases is “White”. The groups are “Old White Men” and “Poor White Trash”. It’s still OK for people to say “Oh, it’s just a bunch of old white men in charge over there, what do they know” the way people used to say “oh, that’s just a bunch of old women talking, what do they know” … and just about everyone rubbishes poor white trash at one point or another. 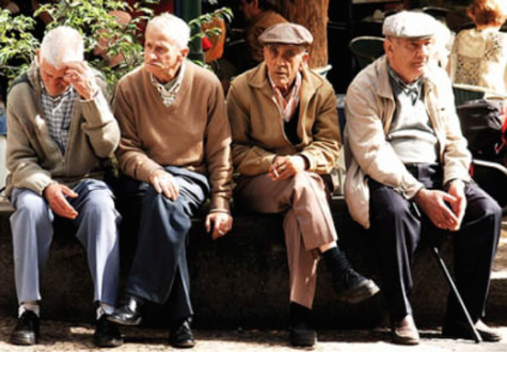 Be clear I’m not complaining about my position. I have no complaints about my life, it’s been astoundingly good. Instead, I am pointing out what I see as a sad effect of the rise of “identity politics”. This is the kind of politics which in the US is mostly practiced by Democrats, where everything revolves around your race, or your sexual identity, or your ethnic group, or your color, or any of many other characteristics that divide us instead of uniting us. The problem with this kind of identity politics is the underlying false assumption that the problems of group X are caused by group Y.

Because you see, if each of the splintered identity groups took responsibility for their own problems, we could stop this insane politics of division and practice a politics of responsibility and inclusion. Think about it. If white folks realized that their pain is not caused by people of color, wouldn’t that bring a huge sigh of relief to the world? And so on with black people and women and all the way down the line to the tiniest groups, left-handed Ethiopian refugees or whatever the cause du jour is—if people and groups started taking responsibility for their own lives and stopped blaming “the other”, we could have a politics of inclusion rather than division.

I think that this is possible. In fact, I think that we can settle a majority of our differences by coming to a cessation of hostilities on three issues: guns, abortion, and homosexuality. It will not solve everything, but it would be a big step. I’m not asking for total resolution, just a ceasefire.

Here’s what I think we need to do, and it will take concessions on both sides to make it work. However, to a large degree, all it requires is seeing the historical inevitabilities and acceding to them. Here’s the plan.

1) Let the gay community live in peace. They are our sisters, brothers, and cousins. Trump has no beef with the gay community, he congratulated Elton John on his wedding and named a gay man among the first dozen people on his Transition Team … and Trump appointed him with no fanfare, as it should be done, just another day in the life. This is the inevitability—gay people are our relatives, they’re not going to disappear. As a nation we need to learn to first live with, and then eventually support, that fact.

1a) And on the gay side, let the Christians live in peace. If the Christian baker in your town doesn’t want to bake your dang wedding cake, just shut up and get it baked somewhere else. Don’t whine about your grievance and sue them out of business, OK? Nobody cares for whiners, plus it’s bad for your image as caring neighbors and responsible members of society …

2) Let each woman choose her own reproductive future. To begin with, Trump won’t push for overturn of Roe v Wade, so your odds start out bad. To opponents of abortion I say look, even if people succeed in overturning Roe v. Wade, it just goes back to the states, and this is not the 1950s. In 2016, most of the states will allow some abortions, with varying restrictions. And you know California and New York and other states will put very few restrictions. So that’s the inevitable part—even if Roe v. Wade were overturned tomorrow, abortion is STILL not going away. That’s magical thinking.

And given that … why fight for the overthrow? What do you gain? The chance to make abortion totally illegal in Wyoming or Kansas and force women there to go to Colorado or California for an abortion? Whoopee. Is that trivial change truly worth an endless battle of attrition where even if you win, abortions won’t stop happening and women will just go to a neighboring state? Does that miniscule gain justify an endless fight that splits the country down the middle?

Look, if you don’t believe in abortions, then I cheerfully suggest that you never have one yourself, and that you allow America’s mothers, sisters, and daughters to make up their own minds about their lives.

3) Let Americans keep and bear arms. In the recent election the fear, perhaps justified in some instances, that Democrats wanted to disarm law-abiding citizens cost them millions of Clinton votes. In addition, every time the issue is raised, gun sales go through the roof because people get nervous about confiscation, whether that unease is reasonable or not. Obama’s actions have sold more guns than any other President. One of the biggest beneficiaries of his anti-gun rhetoric has been Smith & Wesson … hey, this is verifiable fact, check the gun sales data, but for heavens sake, don’t shoot the messenger …

As to gun laws, Chicago has among the toughest gun laws in the USA. It also has among the highest number of deaths by gunfire. Gun laws don’t work for the old bumper-sticker reason … “When guns are outlawed, only outlaws will have guns”. See Chicago if this is not clear.

In addition, restrictions on things like magazine size are a joke in the era of 3-D printers. You can already get plans for 3-D printing 30-round magazines off the web, put them in your printer and there you are … people agitating for laws restricting large magazines are sooo twentieth century.

The inevitability regarding this one is that (1) hundreds of millions of people own guns, and (2) their right to do so is enshrined in the Constitution. So our gun issues are not going to go away any more than our abortion issues will disappear. Our only option is to live with both of them, we have no option called “no guns” or “no abortion”.

(And yes, I know there are folks out there who think any law involving weapons is “infringing” on their rights in the Constitutional use of the term, and is un-Constitutional. To them I say, we already don’t allow private citizens to own tactical nuclear weapons or rocket-propelled grenades … so your “any restriction on weapons ownership is unconstitutional” argument doesn’t hold water. The inevitability for you is that people will NEVER agree that civilians should own nuclear weapons, so your absolute ban on “infringement” doesn’t work in the real world.)

The good news is, there is no organized opposition to background checks, not from the NRA nor anywhere. Make background checks strong, nationwide, loophole-free, uniform and enforced everywhere. In addition, the NRA has endorsed gun safety classes, and for my money they should be mandatory for first-time purchasers. In addition, I would propose that all new guns should be test fired by the manufacturer and the bullet’s characteristics should be registered in IBIS, the existing global database of bullets. Logging bullets is not any kind of an “infringement”, you still get to keep and bear arms just as before. For legitimate gun owners, this will make absolutely no difference. But criminals won’t like it one bit, always a good sign. Then if the gun is stolen and used in a crime with the serial numbers filed off, it can still be identified and returned to the owner, and the criminal who used it can more easily be connected to the crime.

And then let the whole gun issue go, unless you want to start banning hammers and clubs. If you don’t believe in private citizens keeping and bearing arms, I cheerfully suggest that you don’t keep or bear a single one.

I do think that agreeing to those three common-sense paths to resolution could greatly increase the unity of our nation, which at the moment is very split.

Do I think it could happen? Can I see an end to this corrosive identity politics? Sure, Americans are basically decent people, and all they need to do is accept some inevitabilites. And all sides will have to give up some things in that process, so it will be fair (or perhaps equally unfair) to all.

Am I overly optimistic about that possibility of success?

Dangbetcha … no other way for an American to be, I gotta believe we can solve whatever problems the world puts up in front of us.

Best to all, Democrats and Republicans alike,

PS—As is my unchanging custom, all comments and criticisms are most welcome PROVIDED that you quote the exact words that you are discussing. This greatly reduces the chances for misunderstandings to grow and fester.

10 thoughts on “Melanin-Deficient Males of a Certain Age”